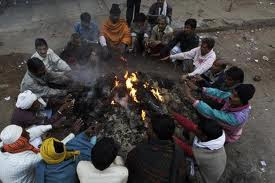 The night temperature in Pune plummeted to 7.9 degrees Celsius on Monday, the lowest for November in the last 48 years. This was 6 degrees Celsius below normal, signifying a severe cold wave condition according to the yardsticks set by the India Meteorological Department (IMD).

Mumbai recorded its second lowest November temperature in a decade on Monday as the mercury dropped to 14.6 degrees Celsius. Between Sunday night and Monday morning, Santa Cruz regist8e8r8ed 14.6 degrees, while it was 21 degrees in Colaba. According to Met officials, the chilly weather is likely to continue for another day.

The lowest November temperature of the decade was recorded on November 26, 2007, when the mercury dipped to 14.4 degrees Celsius. However, the lowest ever temperature witnessed in the month was 13.3 degrees, on November 19, 1990. The weather bureau has attributed the chill to winds blowing in from the north and the northeast. Indian Meteorological Department official Ajay Kumar said,

"There is a western disturbance which is affecting J&K. This has caused snowfall there. Thus, the chill in the northern areas is being carried to Maharashtra by the winds."

They also blamed the weak northeast monsoon due to the deep depression over east-central Bay of Bengal for the dry and cold winds blowing towards interior Karnataka. The Met department has predicted clear skies and dry weather in Bangalore for the next two days. The minimum temperature is likely to remain around 14 degrees Celsius.

Posted by Rajan Alexander at 8:21 AM