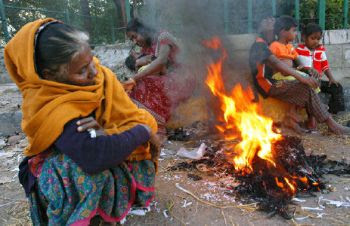 (Times of India) Bangalore got a foretaste of winter with the mercury plunging to a low of 13 degrees Celsius early Thursday. And the mercury could go down further in the next two days.

The sudden dip in mercury was caused by cold and dry winds that blew into Karnataka from the northeast. A dry and hot Raichur recorded its lowest minimum temperature in 120 years at 11.4 degrees Celsius. Chamarajnagar remained Karnataka's coldest at 9.5 degrees.

The scheduled winter season is two weeks away. The weatherman said the cold conditions in interior parts of the state will continue for another 2-3 days.

"The minimum temperature has dropped drastically in the past two days in many parts of Karnataka, especially in the interior region. On the outskirts of Bangalore, the temperature was around 10 degrees Celsius on Thursday morning. It is likely to dip further in the next couple of days.

Explaining the reason behind the sudden chill, Puttanna said:

"The northeast monsoon is weak in Karnataka , and the skies are clear. This reduces the solar radiation during the evening and brings down the temperature."

Other interior parts in the state, too, will soon register a dip in the temperature. This weather is likely to remain till mid-January as winter will set in by mid-December."