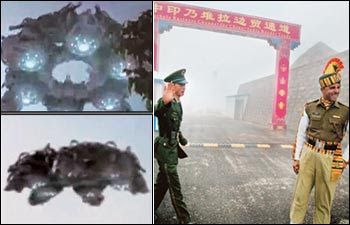 (indiaToday) Top security brass of the Indian government is battling a "mysterious" threat from the Chinese side these days: tennis ball-sized UFOs.

Hundreds of unidentified flying objects (UFOs) have been sighted inside the Indian territory bordering China in recent months, raising security concerns. The issue, initially dubbed a minor one, has turned serious as India prepares to raise it at the diplomatic level with China.

Sources said a meeting of the boundary coordination mechanism - a highlevel official mechanism set up by the two sides to ensure that the boundary incidents between their armed forces do not escalate - is being scheduled later this month where the issue of "luminous objects" will be at the centre of the discussion.

The Indian delegation will be led by Gautam Bambawale, the head of the China desk in the external affairs ministry, while China will be represented by its director general, department of boundary and oceanic affairs. Security officials from both sides will also participate in the meeting.

Highly placed sources said over 150 such incidents have been reported in the last three months and that India's protests at the local border personnel meeting with the Chinese have met with a cursory denial.

The government's decision to raise the 'UFO ' issue at the diplomatic level follows a detailed report sought from the Defence Research and Development Organisation and the Indian Army, and a spectrum analyser to ascertain the objects.

Surprisingly, the radar could not detect these objects indicating that they were nonmetallic.

Also, the spectrum analyser could not detect any signals emitted by them.

The army also flew a reconnaissance drone in the direction of the floating objects, but it didn't yield anything substantial.

"Earlier these reports coming from various sectors of the boundary were sketchy but now we have definite proof of these yellowish spheres coming from the Chinese side; and our concerns will be raised," a source said.

According to the reports, in Ladakh sector, such an object was sighted in Thakung post on October 21 for around eight hours. It had an "intense continuous flash light." Another incident was reported from Arunachal Pradesh's Dichu area on October 19.

Earlier it was believed that the Chinese could be sending remote-controlled lanterns but that theory was shot down after an internal probe.

Mail Today accessed a series of reports sent by the intelligence bureau, the army and the ITBP on the issue, which has been discussed at a high-level meeting on China in the Prime Minister's Office.

Some of the top government officials suspect that these UFOs which appear to lift off from the Chinese side and traverse the sky for three to five hours before disappearing were high-intensity cameras.

"We are worried that there may be a flare-up if the Indian troops decide to shoot these objects," a source said.

Posted by Rajan Alexander at 4:05 PM