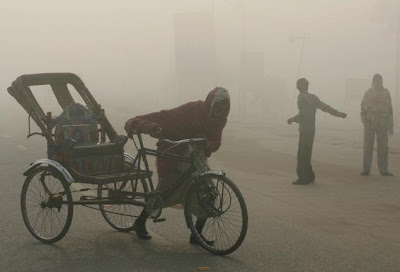 (Times of India) Even as the minimum temperatures remained below normal in the state with Sarsawa in Saharanpur recording 5.4 degrees Celsius, the lowest in the plains, the weatherman has predicted further drop in mercury levels in the coming days due to snowfall in the hill regions of north India.

State Met director JP Gupta said the minimum temperature in the city was four degrees below normal. In rest of the state, minimum temperatures were 2-5 degrees below normal. "There will be no significant change in the temperatures during next 48 hours but thereafter they will drop further by 2-3 degrees. The snowfall witnessed in the hill regions on Thursday due to western disturbance is responsible for the chill factor. The chill will intensify after snowfall is over and western disturbance fizzles out. Drizzles were reported from a few places in west UP bordering Uttarakhand," he said.

Posted by Rajan Alexander at 8:28 AM