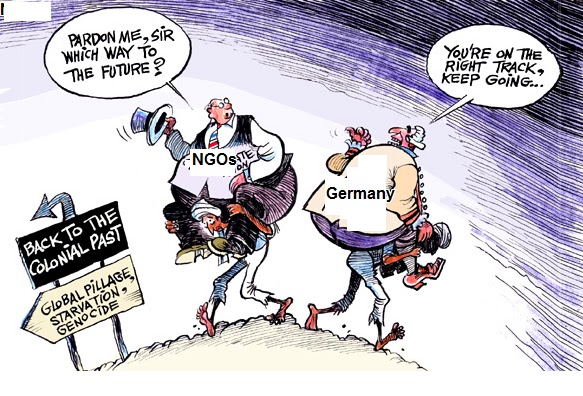 (http://newnostradamusofthenorth.blogspot.in) Hype is beginning to meet reality in Germany, Europe's model country on climate change. Germany's politically correct leaders still sound like nothing would have changed, but their actions tell another story:

Can a member of parliament be expected to be chauffeured around Berlin in a small car? Or should he even stoop to the level of taking a cab? Now that, the Bundestag recently decided, would be asking too much. But because the amount of carbon dioxide emitted by the elegant limousines normally used to chauffeur German lawmakers exceeds standards set three years ago, the Bundestag came up with a convenient solution. They simply raised the previously established limit of 120 grams of CO2 per kilometer to 140.

And what about the fact that the European Commission in Brussels has been fighting for months to set the limit at 95 grams? Forget it! And the climate? Oh, that again.

Only a few years ago, lawmakers would have hardly dared raise the limits for allowable greenhouse gas emissions coming from their official cars. They would have been too worried about upsetting climate activists and triggering outraged editorials in the papers.

But things have changed, so much so that the Bundestag's decision hardly attracted any notice in the press, and neither did the government's decision to eliminate a rule requiring official trips to be climate-neutral. As mundane as these decisions seem, they symbolize a significant failure, namely that no issue of global urgency has tanked quite as quickly as the warming of the earth's climate.

The German political establishment of course understands that their entire global warming policy has failed abysmally. But, as politicans everywhere, they are not prepared to admit that they were wrong. Instead they have opted for a face saving operation:

Despite all this, no politician in Germany, touted as a model country on environmental matters, is willing to back away from the 2-degree target. "It's about saving face," says Oliver Geden, a climate expert with the German Institute for International and Security Affairs in Berlin. That's why the Germans are resorting to methods that auditors would probably characterize as an accounting trick.

This is how the trick works: You allow temperatures to shoot up by more than 2 degrees Celsius at around the middle of the century. Then you reduce greenhouse gas emissions to such an extent that the planet's temperature curve falls below the magic limit of 2 degrees above current levels by 2100. Practically speaking, no climatologist will be alive to experience that day, which makes it easy to reach such a resolution, which insiders refer to as "overshooting."

Posted by Rajan Alexander at 10:20 AM