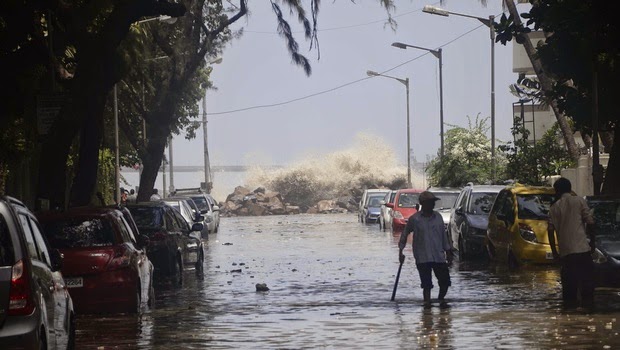 In 2005, Mumbai was inundated in one of the worst floods and the climate hysteria brigade went berserk using the emergency as an example of climate change, extreme weather. The reality was that Mumbai was hit by high tides (higher than 4.5 metres) whose flooding was made worse by rainfall. When we climate sceptics pointed out that Mumbai was done in by high tides than rainfall, we were shouted down.


Come 2014 we climate sceptics feel vindicated. Even before monsoon onset, Mumbai is once again in inundated and authorities have already sounded the red alert that from yesterday to June 18 Mumbai is to be hit by high tides.


Tidal waves measuring up to 4.37 metres high lashed Mumbai shores and coastal Maharashtra districts of Thane, Raigad, Ratnagiri and Sindhudurg around Thursday noon. In Mumbai the waves spilled over onto the low-lying roads, residential areas and playgrounds, dotting several parts of Mumbai including Colaba, Nariman Point, Girgaum Chowpatty, Worli, Shivaji Park and Mahim while massive waves lashed the beaches at Juhu, Versova and Gorai, officials said. Scores of vehicles in south Mumbai were trapped in the waters while panicky pedestrians made a beeline to safety.

“While monsoons are not expected to reach Mumbai till the end of the week, if it rains during high tide, it may create trouble. The predicted high tide of 4.60 meters for Friday is expected to be one of the highest in the upcoming monsoon season.”