Kharif sowing till June 20 almost 18 per cent less than last year; 328 districts under watch, based on rains in the first 15 days 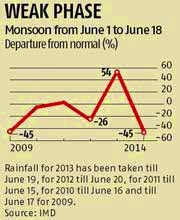 (BusinessStandard) The southwest monsoon has covered almost half of India but pockets of worry remain. Of the 600-odd districts, 328 were under watch, based on the rainfall in the first 15 days, officials said.

“As of now, there is no cause for worry and as the rain progresses to cover almost all of India, more and more districts will move to the normal list from the ‘watch’ list,”

said a senior official from the department of agriculture. He, however, warned the 328 districts could face difficulty if the monsoon took a break of over 15-20 days. For, the initial rainfall in the first fortnight of June in these areas wasn’t encouraging.

“The reason why we are not yet terming the overall situation as worrisome is that barring rainfall, the other two main indicators to declare an agriculture drought — surface moisture index and vegetation spread index —have not worsened,” the official said.

The districts under watch include 45 of 48 in Madhya Pradesh, 69 of 80 in Uttar Pradesh, all 25 in Gujarat, 24 of 35 in Maharashtra, all 25 in Rajasthan and 14 of 27 in Karnataka. The southwest monsoon arrived in India on June 6, five days behind its normal date. It had covered almost 50 per cent of the country till Thursday, late by four days.

The impact of the delayed onset and progress was being felt on sowing. Till Friday, the area covered under kharif crops was around 2.1 million hectares less than last year, the worst impact being on coarse cereals and rice. Data from the department of agriculture showed crops had been planted on 9.55 million hectares, down from 11.60 million hectares during the corresponding period last year.


Posted by Rajan Alexander at 1:39 AM