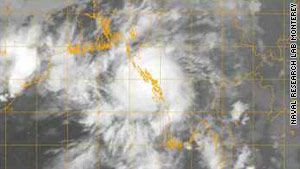 Just minutes ago, came the news that Cyclone Giri made a landfall in Myanmar threatening to unleash flooding and landslides. The satellite photo shows Giri making a landfall, near Kyaukphyu, a large island in western Myanmar.  A weather warning broadcast on state television described Cyclone Giri as a "very strong" storm and urged people living in affected coastal areas in Rakhine state to move to safety. Burmese authorities described the storm as packing winds of about 177km/h at its centre, with gusts of up to 193km/h. 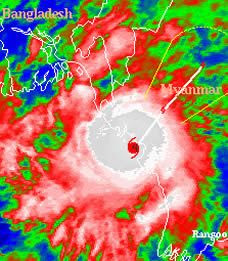 Giri at a borderline category 4/5 on the Saffir-Simpson scale used in the Atlantic, is stronger than Cyclone Nargis of 2008, unleashing winds of 240 kilometres an hour and storm surges up to four metres high. Nargis, probably the worst natural disaster in Burma's history, had weaker sustained winds of 130-135 mph at landfall. However, most of the casualties from Nargis arose from the storm surge which pushed a 13 foot wall of water across the Irrawaddy Delta region, drowning thousands. As Giri is making landfall further north than Nargis, away from the vulnerable, low lying Irrawaddy Delta, the toll may not be as high.

Bangladesh has announced a cyclone alert. More details of damage and casualties are awaited.But with onshore winds to the south of the storm center rainfall may be expected to be torrential in the higher elevations and local flooding can be expected. The real danger is the cyclone triggering a tidal surge of up to 12 feet (3.7 metres) in some coastal towns. 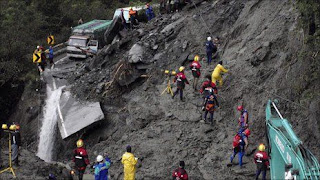 As expected La Nina has stirred up the oceans and what we are seeing is the beginning of a whopper of tropical cyclone season. Just a couple of days ago, Cyclone Megi ravaged the Philippines and now racing towards China. More than 150,000 people were evacuated in Fujian province in China's southeast and tens of thousands of fishing boats were called back to port, the official Xinhua news agency quoted flood control authorities as saying. News just in suggest Megi has also made a landfall in Tawain. 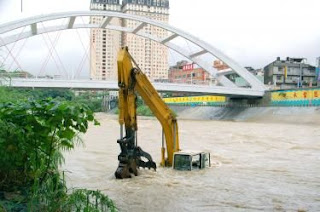 Megi was generating winds of 102 mph (165 kph) and was about 280 miles (450 kilometers) southeast of Hong Kong on Friday morning. Megi dumped heavy rains throughout Taiwan, but Ilan, about 90 miles (150 kilometers) southeast of Taipei, was the hardest hit but authorities evacuated residents from  2,500 villagers in the past two days when rains inundated much of the county.

Preliminary damage was put as 26 dead, and 400 stranded. Megi reportedly triggered severe landslides. Among the dead where 2 nuns, trapped under rabble of the temple though authorities suspect a much larger number buried. More details are awaited.