Update: After clearing the Philippines, Megi is expected to regain some strength over the South China Sea. Tropical Storm Risk's (www.tropicalstormrisk.com) projections show the storm is expected to turn away from Vietnam toward China, with the center passing between Hainan island and Hong Kong.

Typhoon Megi (catfish in Korean)  a category 5 super typhoon, the highest rating, with winds of more than 250 kph (155 mph) slammed into Isabela province, northern Philippines at 11:25 a.m.  It was last known heading southwest across the north of the main island of Luzon. Megi, known as Juan locally, is the world's strongest tropical cyclone of the year so far, according to website Accuweather.com.

The typhoon's eye had shrank to about 50 km but is expected to bring more rain and stronger winds. However, it is expected to weaken and slow down further after slamming into the mountains. The typhoon at the moment remains a serious threat to lives and properties, as it still packs maximum winds of 180 kilometers per hour (kph) near the center and gustiness of 215 kph.

As it crashed ashore, the typhoon whipped up huge waves and toppled electricity poles, cutting off power, phone and Internet services in many areas. There was zero visibility and radio reports said the wind was so powerful that people could not take more than a step at a time.

More than 3,000 people in coastal areas moved to school buildings and town halls that were turned into evacuation centers though initial reports confirmed 1 dead, a day after the figure was put as 10.

Cagayan valley accounted for 12 per cent of national rice output, putting the region's rice crop at risk. Megi hit during the region's peak harvest season, with more than 230,000 hectares of rice fields still in their reproductive and maturing stages. An estimated 75% of this capacity is assumed destroyed. This comes after Indonesia, the world's third largest rice producer, announced that they will import up to 300,000 metric tonnes of rice in the country's first bulk purchase since 2007. Global rice prices are accordingly expected to move northward.

Update: Latest estimates of damage to rice is much lower - 1%. 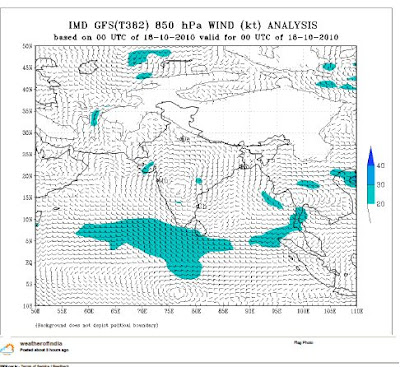 Due to the La Nina, cyclonic activity is on a high. During the SW Monsoon period, India has so far experienced 14 low pressure areas - 13 over the Bay of Bengal and one over the Arabian Sea. We are lucky so far. Last Friday, BoB 3 made a landfall though fortunately weakened, without creating much damaged. But another low pressure area has developed since.


Posted by Rajan Alexander at 5:27 PM