We had in one of our August  postings (Read here) speculated on the possibility of a strong La Nina developing this year. Currently all La Nina indicators are pointing to a deep La Nina developing whose effects should last well into the early months of 2012. We should see at least by the end of the first quarter of next year, the entire net warming during the last century wiped out. For whole of next year, average global temperature anomalies should stay well within the negative band.

If 2010 could be one of the hottest years in recorded histories, 2011 could very well turn out to be one of its coldest. 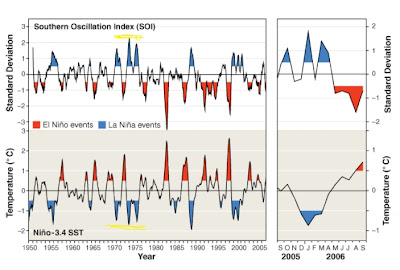 So how strong could the La Nina be? At the moment, as indicated by the Southern Oscillation Index (SOI) and Nino-3.4 STT (marked in yellow), the current La Nina equals the strength of those experienced in 1975. It’s no coincidence that this year’s, massive floods in Northern India being compared to the last experienced in 1975. It reiterates the point extreme weather tends to repeat itself in cycles. This is one of the principle’s Piers Corbyn, master weatherman and astro-physicist uses to forecast with 85% strike rate, including hitting the bulls-eye in predicting the recent Russian heatwave and the Pakistani floods, among others.

The La Nina is still developing and expected to peak only by December, at the earliest. This means that it holds the potential to be a much stronger than in 1975 - one of the strongest La Nina in recorded history. 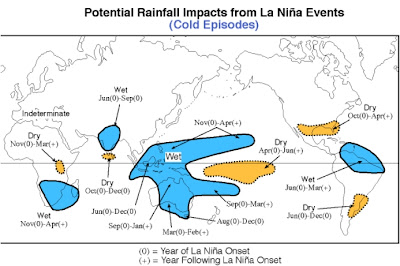 The USDA map illustrates the dual nature impact that La Nina is expected to have globally during the remaining months in the year. Intense rainfall can be expected to be concentrated in areas marked blue - Southern Africa, North-Western South America, SE Asia and Australia while droughts can be expected in some other parts of world shaded in golden-brown.  These impacts could be expected to be even more pronounced due to a stronger than normal La Nina and both these shaded areas combined should be treated where disaster risks potential are maximal in the next 6 months.

For India, the International Research Institute (IRI) at Columbia University, forecasted elevated probabilities of the La Nina favourably impacting the Northeast (winter) monsoon just as it did in the just concluded Southwest Monsoon.

As for expected rainfall trends for September-October-November, the IRI assessed as high the probabilities for excess precipitation for the entire western half of the country except the south-west Coast and North India (Jammu and Kashmir, Punjab, Haryana, Himachal Pradesh and Uttar Pradesh) where it would be normal. October is the time of rising pressure over the Subcontinent, more so to the north, the outcome being a reversal of winds over peninsular India related to the NE Monsoon onset. During and following this reversal, there comes a time of heightened rainfall over South-Eastern India to eastern Sri Lanka; it usually lasts well into December. We should see an early onset of the NE Monsoon expected any day and if the IRI forecast holds, it could be stronger than normal.

With La Nina one of the strongest why are Global Temperatures Holding Firm?

As per the update of 4th October of NASA’s Climate Prediction Centre, Nino-3.4 STT is -1.8C and as per Bureau of Meteorology, (BoM) Australia, SOI is above 25. According to BoM, Australia, in Central Pacific, the sub-surface of the ocean is already more than 6°C cooler than normal for this time of the year, on a weekly scale.  Such rapid cooling within 3 months is the fastest recorded that signals a very strong La Nina in the making. And despite this, global temperatures as illustrated in the graph is holding firm. It led Dr Roy Spencer ex-NASA and astro-physicist who tracks global temperature to comment:

“Past experience (and radiative-convective equilibrium) dictates that the global tropospheric temperature, still riding high at +0.60 deg. C for September, must cool in response to the cool ocean conditions.” 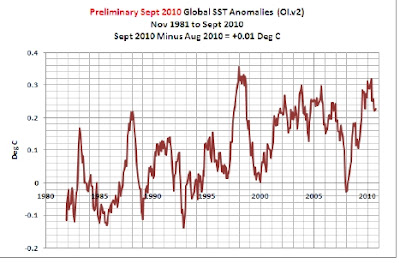 A plausible explanation is enthalpy - latent heat transfer. It takes a huge amount of energy to change water from liquid to gas, and likewise, it gives it all back on condensation i.e. water vapour holds a lot of energy. If that heat is held by water vapour; that moisture will have to fall out somewhere as either rain or snow.

We have already seen this - above normal summer rainfall in many parts of the world including South Asia; heavy snowfall in Southern Hemisphere - South America,  Australia, New Zealand and South Africa and early snow in the Himalayas, Alps, Alaska, parts of Russia with Scandinavian countries already facing the cold Arctic winds.

The deeper the ocean cools, the longer and more heat it transfers to the troposphere, the higher the average global temperature anomalies.  Accordingly, global troposphere temperatures can be expected to continue to hold on to its high levels until the La Nina peaks. Though most climate models forecast this peak will be during this month, others suggest that it could be around December and a few, beyond it. By that time, with oceanic heat transfers to it stopped, the troposphere’s temperatures will start plunging dramatically.

Broadly speaking, La Niñas tend to cause slightly warmer winters than usual in Northern Europe, but often with notable cold snaps early on. In 2008 for example, icy conditions that claimed lives across Europe and North America November-December were partly attributed to La Nina conditions. Why this year’s La Nina winter maybe different is that the Gulf Stream, part of the Ocean Conveyor Belt, has disappeared with some other parts, greatly damage. This has prompted Polish forecasters to predict the worst winter in 1,000 years while Russian climatologists predicted a slightly colder than normal winter. Most weather forecasters have unlike previous years, shied away from giving an advance winter forecast, not willing to commit themselves.

SOUTH ASIA
For South Asia, the coming winter is likely to be one of the harshest experienced in recent times.  As opposed to around 100 official deaths due to this year’s El Nino induced summer heatwave, last winter’s coldwave, witnessed official death toll crossed 1,500 in India. Because of its huge population of homeless population throughout South Asia, this makes the region extremely vulnerable to cold winters. This year, if government antipathy as seen last year is repeated, death toll could cross in multiples of 10s with huge swathes of Northern India to come under sub-zero temperatures. Coldwave conditions could enter right up to northern parts of Southern India.