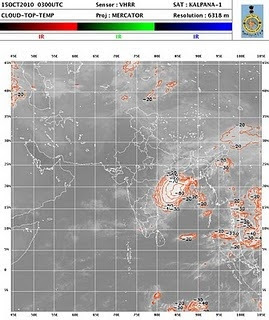 The deep depression over northwest Bay of Bengal moved west-northwestwards and lay centred at about 60 km southeast of Puri and 120 km east-northeast of Gopalpur in Orissa.  BOB 03 is now making a    landfall in the areas marked in red in the satellite image. The well-marked low-pressure area over East-central Bay of Bengal intensified into a tropical depression having intense cloud tops of -80C. As you read, it is slamming into coastal Orissa and NE Andhra Pradesh. Winds have started picking up in many areas and heavy rains also happening.

The severe weather warning from the World Meteorological Office said that the system is expected to:

"Move Northweastwards and cross Orissa coast between Gopalpur (43049) and Paradip (42976) near Puri (43053) between 1200 UTC and 1800 UTC on 15th October 2010. Sustained maximum surface wind speed is estimated to be about 30 knots. The state of the sea is very rough around the system centre. The estimated central pressure is about 996 HPA.
Met office warms that squally winds with speed reaching 55-65 km/h, gusting to 75km/h, would previal along and off North Andhra Pradesh, Orissa and West Bangal coasts during next 24 hours.Heavy to moderate rain with a wind speed of 35 to 55 kilometers per hour is continuing in the coastal districts of Ganjam, Puri, Jagatsinghpur, Kendrapara, Bhadrak and Balasore."

Met department has also warned of heavy rainfall in five coastal districts of Andhra Pradesh over the next 48 hours. It has predicted heavy to very heavy rain in Srikakulam, Vizianagaram, Visakahaptnam, East and West Godavari districts of coastal Andhra Pradesh. The district administration has been put on alert and the fishermen have been advised not to venture into the sea. Met department has also predicted widespread rain in coastal districts of West Bengal today. 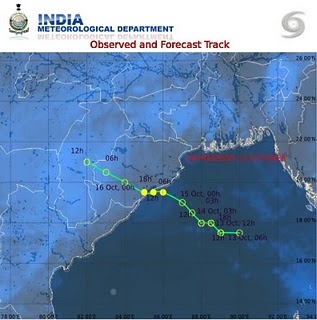 Details are being awaited. The India Meteorological Department (IMD)’s prediction once again was found on the dot. Their good run continues after hitting the bulls-eye with SE Monsoon and Commonwealth Games Weather. But the sad news is that the system appears large and an estimated 90% of the risk area is one way or other affected. 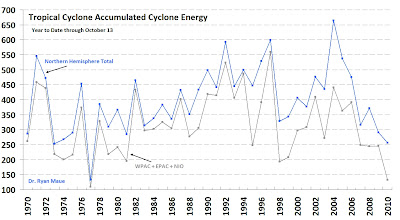 This has been the season predicted with maximum storms. While the number of storms has more or less on the lines predicted, what was surprising with the exception of Cyclone Mindulle that hit Vietnam, the lack of landfall was a merciful trend. As seen above, accumulated cyclone energy (ACE) being globally at a low. Alas all this may change with the Bay of Bengal getting active and with BOB 03 to make an expected landfall.

The sea-surface temperature over large parts of the Bay continued to be above the threshold level needed for sustaining tropical storms. Upper level divergence that sets up the window for the system to ‘breathe' through the top and moderate vertical wind shear were two variables that boosted the prospects for further strengthening. The West Pacific-South China Sea-Bay of Bengal basins would need to calm down before the northeast monsoon can unfold along India's southeast coast. As a result, the last two weeks saw a monsoon deficiency over 40% - the lack of rains a boon for the Commonwealth Games. See IMD map below: 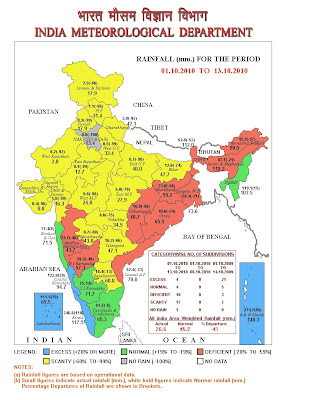 Posted by Rajan Alexander at 1:05 PM