Now, the Monster of a La Nina Confirmation???


Strongest La Nina since 1955-56, Most Rapid Onset in the Record
Source: http://www.globalwarmingskeptics.info/?p=3597 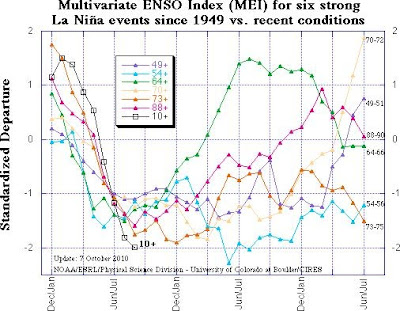 In the context of recent plunge of the MEI into strong La Nina conditions, this section features a comparison figure with strong La Nina events that all reached at least minus one standard deviations by June-July, and a peak of at least -1.4 sigma over the course of an event. The most recent bigger La Nina events of 1998-2001 and 2007-09 did not qualify, since they either did not reach the required peak anomaly (the first one) or became strong too late in the calendar year (both).

The most recent (August-September) MEI value shows a continued drop from earlier this year, reaching -1.99, or 0.18 sigma below last month’s value, and 3.39 standard deviations below February-March, a record-fast six-month drop for any time of year, while slowing down a bit at the shorter time scales. The most recent MEI rank (lowest) is clearly below the 10%-tile threshold for strong La Nina MEI rankings for this season. One has to go back to July-August 1955 to find lower MEI values for any time of year.

Negative SST anomalies are covering much of the eastern (sub-)tropical Pacific in the latest weekly SST map. Many of these anomalies are in excess of -1C.

El Niño/Southern Oscillation (ENSO) is the most important coupled ocean-atmosphere phenomenon to cause global climate variability on interannual time scales. Here we attempt to monitor ENSO by basing the Multivariate ENSO Index (MEI) on the six main observed variables over the tropical Pacific. These six variables are: sea-level pressure (P), zonal (U) and meridional (V) components of the surface wind, sea surface temperature (S), surface air temperature (A), and total cloudiness fraction of the sky (C). These observations have been collected and published in COADS for many years.

The MEI is computed separately for each of twelve sliding bi-monthly seasons (Dec/Jan, Jan/Feb…, Nov/Dec). After spatially filtering the individual fields into clusters (Wolter, 1987), the MEI is calculated as the first unrotated Principal Component (PC) of all six observed fields combined. This is accomplished by normalizing the total variance of each field first, and then performing the extraction of the first PC on the co-variance matrix of the combined fields (Wolter and Timlin, 1993).

In order to keep the MEI comparable, all seasonal values are standardized with respect to each season and to the 1950-93 reference period. The MEI is extended during the first week of the following month based on near-real time marine ship and buoy observations (courtesy of Diane Stokes at NCEP) summarized into COADS-compatible 2-degree monthly statistics at NOAA-ESRL PSD. Caution should be exercised when interpreting the MEI on a month-to-month basis, since the input data for updates are not as reliable as COADS, and the MEI has been developed mainly for research purposes. Negative values of the MEI represent the cold ENSO phase, a.k.a. La Niña, while positive MEI values represent the warm ENSO phase (El Niño). You can find the numerical values of the MEI time series under this link, and historic ranks under this related link. You are welcome to use any of the figures or data from the MEI websites, but proper acknowledgment would be appreciated. Please refer to the (Wolter and Timlin, 1993, 1998) papers (NOW available online as pdf files!), and/or this webpage. If you have trouble getting the data, please contact me under (Klaus.Wolter@noaa.gov)