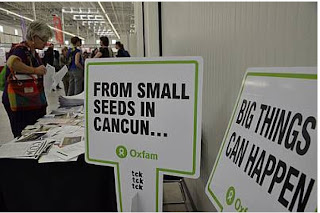 Not perfect, no treaty, not binding, fails to establish a firm date for negotiators to reach a conclusion on a new climate treaty, but a deal has been struck. The agreement says that developing countries will have to take "nationally appropriate actions" to curb their emissions by 2020. Hence, developing nations don't have to take targeted emission cuts like their developed counterparts. And the developed countries need not have any legally binding commitments.  A compromise to accommodate everyone (almost everyone, except for Bolvia)  ......The deal  made a grab for the lower hanging fruits and includes a Green Climate Fund that would give $133 billion a year in aid to poor nations by 2020, measures to protect tropical forests and ways to share clean energy technologies. These are sops to the developing countries for their part in the compromise. The only problem is that the details in operationalizing these measures are still not finalized.

If we listen to the spin of the UN and government delegates, even to our own Jairam Ramesh, Minister of Environment,  we might get the idea that a lot was accomplished and the world is truly well on the way toward solving the imaginary problem of global warming. Even observers from the environmental community applauded the outline, describing the compromise agreement as modest progress. "It puts us on a path so the process can keep MOVING FORWARD" said David Waskow, climate change program director for Oxfam America, adding that although "it's not everything we want, we're pleased."

How pleased David? Should Oxfam be pleased even when the US and BASIC (Brazil, India, China and South Africa) countries are pleased with the outcome? The BASIC countries were accused a year back at Copenhagen by the same environmentalists and Climate Justice movement, in which Oxfam was apart, for forging an evil axis with the US and torpedoing a comprehensive climate agreement. India's environment minister, Jairam Ramesh, the master strategist of BASIC countries,  called the present deal "a historic achievement" and noted that India had played a key role in crafting it. The United States, the only nation that didn't sign the Kyoto Agreement, rendering it useless, has always been one of the major stumbling block in reaching a comprehensive agreement on climate. U.S. negotiator Todd Stern said, "What we have now is a text that, while not perfect, is certainly a good basis for MOVING FORWARD." (Notice the similar line echoed by Oxfam)

What both Ramesh and Stern failed to mention was that the Cancun agreement basically cements and flesh out key elements of the Copenhagen Accord, the controversial deal brokered among President Obama and the leaders of China, India, Brazil and South Africa in a closed door meeting last year. That should tell us something right there. And so if both US and BASIC are happy, rest assured, then nothing significant was accomplished. In fact the seeds of destruction of the climate hysteria has already been sown.

Alden Meyer, director of strategy and policy for the Union of Concerned Scientists, "The big issues are still unaddressed". So desperate they were for a deal, Cancun papered over big and divisive issues such as  Kyoto Protocol that expires in 2 years. Japan, Canada and Russia wants to opt out but developing countries consider such a step a deal breaker in arriving at a comprehensive climate treaty in future.  Equally important issue is the bleak prospect of US ratifying any comprehensive climate treaty with the Republicans controlling the House of Representatives. To avoid a Kyoto type situation (sans the US), major players like India would stop ratifying any future treaty, unless and until the US first ratifies such a treaty. Rest assured, these type of issues will come back as a front burner issue next year in Durban, and it will be impossible to avoid it again

Meyer also said delegates have "bought themselves some time". That happens to be the common repetitive refrain of spin doctors at Cancun- The dream of a comprehensive international climate treaty has survived to live another day. But can it? It all depends what the global average temperature anomalies  would look like next year.

From the chart prepared by Roy Spencer, ex NASA, astrophysicist, for November, average global temperature anomaly stands at 0.38C. He notes in his blog:

"The tropical tropospheric temperature anomaly for November continued its cooling trend, finally falling below the 1979-1998 average…but the global anomaly is still falling slowly:+0.38 deg. C for October November, 2010. 2010 is now in a dead heat with 1998 for warmest year, with the following averages through November:

Notice at the end of November this year, the Tropics(Trop)  is already in negative territory, and the Southern Hemisphere (SH) demonstrating only moderately positive anomaly. It is really the Northern Hemisphere (NH) , accounting for the largest land mass in this planet, that is primarily responsible for keeping global average temperature anomaly at a relatively high level of 0.38C by commanding higher weightage and temperatures. However, this December, NH has been under a tight grip of harsh cold, in a winter described as the worst in the last 100 odd years. If NH too turns negative, then the global average temperature anomaly  should turn zero, if not negative for this month. This in turn means that not only 2010 will fail to be warmest year since 1998, but from now on, due to the strong La Nina effect, which is expected to last through the first quarter of 2012, the  year 2011 will be in contention to be one of the coldest in recorded history, with coming January and February to be extremely cold, as never before in recent years.With this winter, global climate would have firmly shifted into the global cooling mode for the next 25-30 years.
Nothing exceptional has changed in twelve months between Copenhagen and Cancun, in terms of political divide between developed and developing countries. So what explains the compromise at Cancun? Perhaps everyone knows that the global warming scam is over, the climate turning decisively against them. This perhaps explains why countries like Japan, Canada and Russia are now embolden to break ranks by threatening to ditch Kyoto Protocol. For developing countries, particularly the small island states, they too recognize that with the scam over, the possibility of large scale wealth transfer from North to South has become bleak, so they are prepared to grab the lower hanging fruits and be content. Perhaps David Waskow, climate change program director for Oxfam America, was not too wrong. The mood at Cancun could well have been "It's not everything we want, we're pleased"
Posted by Rajan Alexander at 12:54 AM