“Global Warming” gets out of Control - Now creates “Global Cooling” 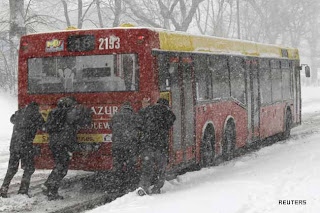 "Let it Snow", a popular song was written by lyricist Sammy Cahn and composer Jule Styne on July 1945 during one of the hottest months on record in the US state of California.

But the current situation is a little different. As one climate skeptic cynically commented “We are told the earth continues to get warmer, yet it’s feeling a lot colder outside.”  And as it does, we may logically conclude so much for global warming and the prediction of snow’s extinction.  This probably led Dr Tim Ball, a respected climatologist to comment in his blog “Nasty old Mother Nature causes the demise by going about her normal business. As the old advertisement said, it’s not nice to fool with Mother Nature. The Northern Hemisphere winter is already proving once again that global warming is another undelivered government promise.”

But life apparently isn’t that straightforward. 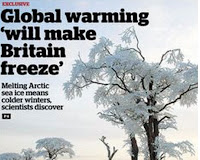 Since 1998, the hottest year in recorded history, there is no statistically significant warming trend. And yet, none of the 24 models used by the IPCC view that as even possible.  Simply put, they are at odds with reality. So what do global warmists do? They precisely did what Albert Einstein warned about of science regressing into a religion whenever facts are changed to suit theory instead of the other way round.The result is, you guessed it - all this cooling is due to global warming! This led to Steven Goddard in his blog  to observe:

Yet another skeptic blog was even more cynically graphic:

That covers more or less every possibility, apart from “no change at all”, hence it is similar to expecting at the roulette table any number between 0 and 14 and between 16 and 36, having seen “15″ come out several times in a row.

There is no need of peer-review or statistical analysis to do that. There is not even any need to model the roulette wheel and its pockets. And as any trip to the Casino can show, there is no reward at all in betting upon such an extremely-wide-ranging set of “projections”.

Steven Goddard in his blog  rips through the claim it is the melting Arctic Ice that is correlated with the Northern Hemisphere Snow Extent by providing this graph: 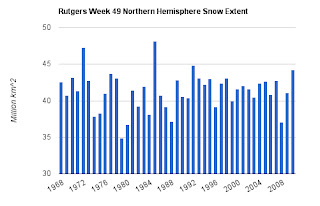 But lets assume for a moment that global warming causes global cooling. Then what if current conditions intensify any further in line with the cold intensification seen during the last 3 winter seasons?  Logically we should be heading for another Ice Age! And yet all the so-called solutions for combating climate change are confined to tackling global warming and none for global cooling. Just think about the disastrous impact of such a line of action should global cooling be round the corner, leave alone an Ice Age.

The prediction that global temperature will rise by 4 degree Celsius by end of this century was based on those provided by UK Climatic Research Unit (CRU), East Anglia working in tandem with UK’s Met Office. This is the third consecutive year the UK Met office failed to with their winter forecast - in all these three years they predicted a mild winter in line with the UK government’s warmist policy.  Christopher Booker writing in the Telegraph castigated the Met office for blotching up their predictions creating chaos due to unprecedented snow deluging the country:

The fact is that many sceptic climatologists hit the bulls-eye in all these three years. One of the most legendary of them is Piers Corbyn, astro-physicist who runs Weather Action. Piers Corbyn (right in the photograph) and Joe Bastardi of Accuweather (left)  in the photograph) are among the best in the business of weather forecasting, though I tend to rate Corbyn topping the list.


He is the bane of global warming alarmists. They call him names, send him threats, and don’t want his work to appear in academic publications. He also predicts the weather correctly about 85% of the time. And London’s city government isn’t the only organization that is listening to Corbyn rather than the official climate orthodoxy who has been wrong year after year. Here’s an extract from the Telegraph interview of Corbyn:

“Do you remember? They [The British Met Office and the Global Warming Orthodoxy] said it would be mild and damp, and between one degree and one and a half degrees warmer than average. Well, I am now 46 and that means I have seen more winters than most people on this planet, and I can tell you that this one is a corker.

Never mind the record low attained in Northern Ireland this weekend. I can’t remember a time when so much snow has lain so thickly on the ground, and we haven’t even reached Christmas. And this is the third tough winter in a row. Is it really true that no one saw this coming?

Actually, they did. Allow me to introduce readers to Piers Corbyn, meteorologist and brother of my old chum, bearded leftie MP Jeremy. Piers Corbyn works in an undistinguished office in Borough High Street. He has no telescope or supercomputer. Armed only with a laptop, huge quantities of publicly available data and a first-class degree in astrophysics, he gets it right again and again.

Back in November, when the Met Office was still doing its “mild winter” schtick, Corbyn said it would be the coldest for 100 years. Indeed, it was back in May that he first predicted a snowy December, and he put his own money on a white Christmas about a month before the Met Office made any such forecast. He said that the Met Office would be wrong about last year’s mythical “barbecue summer”, and he was vindicated. He was closer to the truth about last winter, too.

He seems to get it right about 85 per cent of the time and serious business people – notably in farming – are starting to invest in his forecasts. In the eyes of many punters, he puts the taxpayer-funded Met Office to shame. How on earth does he do it? He studies the Sun.

He looks at the flow of particles from the Sun, and how they interact with the upper atmosphere, especially air currents such as the jet stream, and he looks at how the Moon and other factors influence those streaming particles.

He takes a snapshot of what the Sun is doing at any given moment, and then he looks back at the record to see when it last did something similar. Then he checks what the weather was like on Earth at the time – and he makes a prophecy.

I have not a clue whether his methods are sound or not. But when so many of his forecasts seem to come true, and when he seems to be so consistently ahead of the Met Office, I feel I want to know more. Piers Corbyn believes that the last three winters could be the harbinger of a mini ice age that could be upon us by 2035, and that it could start to be colder than at any time in the last 200 years.”

Posted by Rajan Alexander at 11:26 PM