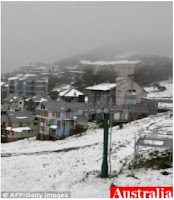 This blog had been warning of one of the harshest la Nina induced winter for as long as six months now. The prediction apparently had been on track.

This winter, labelled by experts as the coldest over 100 years, it is all set to blow well into 2011. Much of the focus of this season’s brutal winter had been on Northern Hemisphere. North America, Europe, Russia and China have been hit hard for the third straight record-breaking winter season. Media headlines are now all abuzz about the siege of unprecedented blizzards and freezing temperatures, disrupting services of public transport and utilities; closure of major airports causing flight disruptions; loss of lives, in UK estimated at 300 per day (read here) while causing an endless backlog of crisis that municipalities will have difficulty managing for the foreseeable future.

So intense has been the global cooling this year, it deep froze even certain parts of the Southern Hemisphere in the middle of their summer. Snow has fallen in parts of Australia’s East Coast states New South Wales and Victoria, leaving ski resorts -  some of which are usually snow-free at this time of year - with dumps of up to four inches snow.

India to Experience Worst Winter in Decades, Death tolls could be in Thousands! 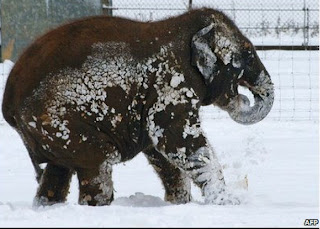 Ann, a Russian diplomat’s 7 year daughter captured local media attention.  Prior to her first visit to India last week with her family, she excitedly painted an elephant in snow as her expectation of India! Little Ann wasn’t too wrong. India too is not immune to this cooling trend now enveloping the globe. We provide a round-up of cooling trends within the country:

Shimla, the hill station, known for the imperial grandeur of buildings that were once institutions of power when it was the summer capital of British India, has remained devoid of any prominent snow cover in recent times. Besides one mild spell of snow (8.2 cm) Jan 13, 2010, there was no snow at all in Shimla last winter. This year too there is hardly any snowfall so far.

Shimla previously experienced snowfall on the last day of the year in 1990, 1995, 2000 and 2002. However, the Indian Meteorological Department (IMD) predicted that Shimla and other popular hill destinations of Himachal Pradesh are likely to witness mild to moderate spells of snow, adding to the New Year's Eve festivities.

The western disturbances are approaching and these are likely to bring snow in the high hills of the state, IMD director ManMohan Singh told the Indian Express. Western disturbances are storm systems originating from Caspian Sea and moving across the Afghanistan-Pakistan region and are likely to be active from Dec 29 and expected to intensify by New Year's Eve. The higher reaches in Shimla,  Kinnaur, Lahaul and Spiti, Chamba, Kangra and Mandi districts and even Shimla's neighbouring hills like Kufri, Fagu and  Narkanda  are likely to get a fresh blanket of snow by then. Manali, the popular tourist resort in Kullu valley, about 250 km from state capital Shimla, experienced its first spell of snow far back by Oct 22.  The Rohtang Pass (13,050 feet) located 51 km from Manali and Baralacha Pass (16,020 ft) similarly had heavy snowfall from last month onwards.  Meanwhile, a cold wave continued to grip the higher reaches of state with Keylong, headquarters of Lahaul and Spiti recording the lowest minimum temperature of minus 8.2 degrees Celsius. Kalpa in Kinnaur district saw a low of minus 2, while it was 0.9 at Bhuntar in Kullu district, 4.3 at Dharamsala in Kangra district and 3 degrees in Shimla town. 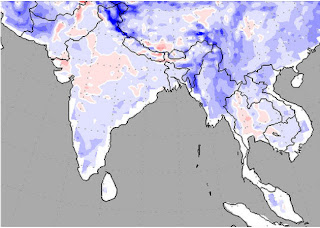 Most parts of Punjab and Haryana are experiencing cold wave conditions with the mercury plunging below average by two to five notches in various cities, especially during mornings and late evenings.

Meanwhile residents of Patna city in India's eastern state of Bihar cozily wrapped themselves in many layers of sweaters and mufflers, to beat the cold wave. "We stay here on the pavement. We blaze grass to warm ourselves because we don't get wood easily, so we blaze grass to be warmed. And stay on the pavements," told Bihari Prasad, a pavement dweller in Patna to Hindustan Times. In Uttar Pradesh, the dense fog continues to disrupt rail and road traffic. The long distance trains are running 6 to 24 hours’ delay resulting in cancellation of several trains. According to met office the night temperature is ranging between 3 to 9 degrees Celsius across the state. Bijnore recorded lowest minimum temperature of 2.4 degrees Celsius.

Chilly winds and freezing temperatures also continued in the Kashmir Valley and the Ladakh region. Leh had a chilling minus 12.6 degrees Celsius; Srinagar with minus 4.2 Celsius saw thick fog while it reached minus 10.2 in Kargil town of Ladakh region. The temperature dipped to minus 4.2 in the ski resort of Gulmarg while it was minus 5.8 in the Pahalgam hill station.

Leh that experienced a massive cloudburst disaster some months ago is the centre for rehabilitation programmes by many leading humanitarian agencies, including those like Oxfam who pursue high decibel global warming campaigns. Oxfam who are undertaking a shelter program has reportedly temporarily abandoned their efforts due to freezing conditions.

Intense cold wave continues in Orissa. The capital city of Bhubaneswar has broken the 10-year record. While the entire Phulbani district including the Daringibadi area has also broken the 9-year record in this season. While the state capital recorded a record low of 10.5 degree Celsius on Wednesday, Phulbani and Daringibadi recorded 3.4 and 1.5 degree Celsius respectively.

The intense cold has also resulted in the death of several birds and aquatic animals. Sources in the local Met office said that most of the districts recorded temperature below 8 degree Celsius. The temperature recorded on Wednesday is as follows: Cuttack- 10.6, Jharsuguda-7.9, Sambalpur-6.1, Balangir-6.9, Sundargarh-6.4, Baripada-6.5, Bhawanipatna-7.6 and Koraput-7.5. The Met office also said that the intense cold wave condition would continue for the next 48 hours.

All other regions in the country were experiencing significantly below average though not freezing temperatures yet. How far freezing weather can go south of the country during the next two months is indicated by Mysore in Karnataka where the mercury touched 9.8 degrees Celsius a couple of days back, the coldest December night for the city in 117 years. Bangalore went below 10 degrees on Christmas day.

So will it Snow in New Delhi this winter? 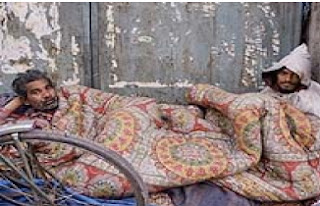 NDTV, one of India’s premier English new channels, is RK Pachauri, Chair of IPCC’s favourite channel. In fact this is the only channel Pachauri now gives media interview to after coming under media siege since the time IPCC’s report was exposed for a whole series of errors.  In fact the relationship between the two is seen by many as verging on an incestuous character. Pachauri was the showpiece of NDTV who displays their pseudo- green credentials each year by conducting a live 24 hour “Greenathon” programme that focussed mainly on global warming.  After the IPCC and Pachauri were discredited, the spotlight on Pachauri is greatly reduced and NDTV now fights shy to even mention climate change and the “Greenathon” programme is now has become totally core environment focussed. Last month however, Pachauri attending the Climate Change meeting at Cancun flew down to New Delhi to make a brief appearance at NDTV’s Save the Tiger programme and then flew back to Cancun to attend its remaining sessions.  And this is the man who tells the world to give up flying to save the world from climate disaster. But the surprise this year is that NDTV has started a campaign to raise funds to provide free blankets for the poor and the homeless to meet this winter cold. Last year, more than 1,500 people died due to the cold wave and this year’s expected harsher winter, can see the death toll spiraling in multiples of this figure so much so it threatens to emerge as a major disaster situation. Last year the Supreme Court had to direct both the Central and Delhi State governments to protect homeless deaths from the cold wave.

NDTV apparently has grown up. There are now openly acknowledging the dangers of global cooling. The surprise does not end there. NDTV blanket program is being delivered in partnership with two reputed NGOs including Indo-Global Social Service Society, an apex body of the Catholic Church. We know the scam is over when staunch global warmists start distributing blankets and hurray to that!

So far, only about 2,000 blankets have been raised. This is only a drop in the ocean in meeting the challenges the winter holds in the next two months. As a nation we need to do much more. Please support the NDTV  program or those by  any other NGOs to limit the death toll this winter that otherwise could  emerge as a major catastrophe in terms of  loss of lives.