Cancun Speeds up the end of Climate Hysteria 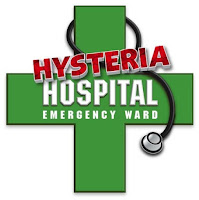 The run-up to Cancun was no different to those of previous climate meets. The alarmist machine was busy overtime cranking out scenarios, reports, research and propaganda on the evils of a carbon-based economy. Their favourite had been the claim that 2010 ties with 1998 for the warmest year on recorded history - both super El Nino years. Why would they do that we may ask as it only confirms an absence of evidence that global warming is demonstrating an accelerating trend in the last 12 years. Christopher Booker jocularly commented:

“The prediction that global temperatures will rise by four degrees in 50 years comes from that same UK Met Office computer which five weeks ago was telling us we were about to enjoy a milder than average winter, after three years when it has consistently got every one of its winter and summer forecasts hopelessly wrong.

When Vicky Pope, the Met Office’s Head of Climate Change Advice, wanted to fly out from Gatwick to Cancun to tell them that 2010 is the hottest year on record, she was trapped by inches of the same global warming that her £33 million computer had failed to predict.”

However the most outlandish of these offerings during the run-up to Cancun had been that permafrost containing an estimated 1.5 trillion tons of carbon, being released at an accelerating rate as Arctic climates change. Alarmist claimed the release of methane could have a significant impact on the rate of climate change. This claim made despite arctic sea ice demonstrating no evidence of accelerated melt down and increase of atmospheric carbon likewise showing no runaway increase. 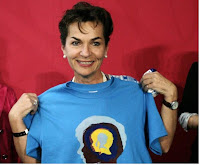 With United Nations climate negotiators believe facing an uphill battle to advance their goal of reducing emissions linked to global warming, it's no surprise that the woman steering the talks appealed to an ancient Mayan goddess Monday. The Cancun conference began with an invocation of goddess Lxchel. Yes you heard it right. Lxchel! As reported by the blog Newsbusters:

"Christiana Figueres, executive secretary of the U.N. Framework Convention on Climate Change, invoked the ancient jaguar goddess Lxchel in her opening statement to delegates gathered in Cancun, Mexico, noting that Lxchel was not only goddess of the moon, but also "the goddess of reason, creativity and weaving. May she inspire you -- because today, you are gathered in Cancun to weave together the elements of a solid response to climate change, using both reason and creativity as your tools?"

The low expectations of the Cancun UNFCC, COP 16 however misleads as it gives an impression that almost nothing will materialize as tangible outcomes. Invocation to Lxchel aside, judging from the first week proceedings, we climate sceptics are being forced to radically revise this faulty perception. With all humility we confess, we were wrong, so wrong. Never in our wildest imagination did we expect Cancun would set the ball rolling for the quicker end of this global warming scam. Three developments in particular triggered our revision of perception. The most significant setback to climate alarmists was Japan’s refusal to extend their Kyoto commitments. The Guardian reported “The forthrightness of the statement took people by surprise, said one British official". Soon after Japan’s stunner came UN climate chief Christiana Figueres clarification that Japan is only one of three countries among the 36 signatories that's opposed to extending their emission targets under the pact. She announced the others being Canada and Russia! The flood gates are now open to dump Kyoto! If this is not the beginning of the end of this scam what is?


Back to low expectations, United Nations climate chief, Christiana Figueres of Costa Rica believes a single, definitive, all encompassing climate deal is unlikely in her lifetime. Similarly, UN Secretary General Ban Ki-moon sees no binding deal coming out this year. If the prognosis for Cancun is no legally binding climate pact possible, then Plan B was to continue Kyoto Protocol for developed countries and introduce a voluntary burden sharing for developing countries. The Kyoto Protocol had stipulated the different responsibilities and obligations for the developing and developed countries, mapped out different stages for the world to cope with climate changes and set common but differentiated responsibilities.

The US, the leading carbon emitter on per capita basis, is still a non-signatory to this treaty. India’s Environment Minister summed up this challenge when he said  before leaving for Mexico his mandate was to “play a bridge” between the US and the others. He said any climate deal without the US on board would not be worth it and exhorted America to improve its offer of a 14% emission reduction target by 2020. With the US a non-signatory to Kyoto and unlikely to do so future with Republicans controlling the House of Representatives, now combined with 3 developed countries deciding to walk out of the Protocol amount, means that Plan B also virtually goes up into flames.
So Cancun is all about Plan C. These are attempts to gathering lower hanging fruits - mini-deals in transfer of new technology, a mechanism to monitor, verify and report emissions, setting up a climate fund amounting up to US$100 billion by 2020, a plan to reduce emissions in the world’s rain forests and a multitude of bilateral agreements on the sidelines. Seeking agreements here is like putting the cart before the horse as with Plan A & B taken out by events, there is simply no impetus for world leaders to reach agreement on Plan C. 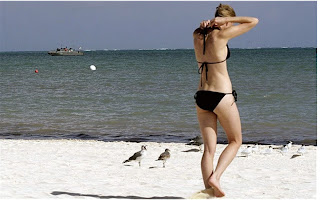 This brings us back to the other two major developments in Cancun. A block of developing countries accused Western delegates of being more interested in entertaining themselves in Cancun’s wonderful sunny beaches than in the on-going negotiations! This could well be negotiation tactics, but it does well be a lack of seriousness and urgency on the part of Western countries to seal up a deal at Cancun.


The next development was as serious setback as it could be - Pachauri, Chair of UN-IPCC confessing that “There are huge gaps in the effort as far as scientific research is concerned”. If there are gaps in climate research, how valid are any way the UN-IPCC’s forecast that the world will see a more than 4C rise by the end of this millennium?  Given these doubts, why should western leaders be expected to show any urgency at all? We can now understand why they prefer the warm beach, particularly so when their countries are one foot under snow!Besides, each of these mini outcomes under Plan C has significant obstacles in realizations. Solutions to a global climate fund is badly crippled by the contraction of carbon market by the closure of the Chicago Exchange on one hand and the economic problems faced by the US and Eurozone economies on the other hand. Besides, any agreement on transfer of new “green” energy technologies is badly hampered by the patent regime in most developed countries. This is an area which India places high importance. Being a net oil importer, the country recognizes that in future, for sheer economic reasons, it should switch to non-oil energy - so called renewable energy being one such option. This leaves agreement on forest with highest prospect of agreement among the targeted outcomes under Plan C. The fact is that even with the existence of Kyoto Protocol, global availability of and demand for fossil fuels — oil, gas and coal — continues to climb and there isn’t a realistic outlook for future energy use that shows any signs that carbon-based energy sources are about to decline. The green energy bubble is bursting in Europe as nation after nation are slashing their subsidies to solar and wind projects, the touted alternatives to fossil fuels. 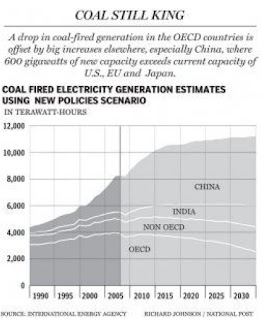 An International Energy Agency (IEA) study indicates that carbon-based fuel use is going to increase in the future a significant way. Coal will soar as China increases its use to power its growth. A projected drop in coal-fired generation in the OECD countries is expected to be offset by big increases elsewhere, especially China, where 600 gigawatts of new capacity will exceed the current capacity of the U.S., European Union and Japan combined.The main increase in fossil-fuel use will come from natural gas, especially shale gas, a new source of lower-carbon fuel that until two years ago did not exist as a viable fuel. Oil, meanwhile, is not running out of fashion. Despite all the talk of electric cars and green renewable, gasoline and diesel are likely to remain the main fuel for automobiles for decades, with electric cars capturing only a single-digit fraction of the market.An expected the Cancun failure and extinction of Kyoto Protocol would give further impetus to these trends. This augurs well for countries like India who needs energy, and lots of it, to fulfill the economic dreams of our people. Fossil fuels remain the cheapest and most efficient energy source to lift our people out of poverty, particularly as we possess the fourth largest reserves in the world. Wind and solar energy technology have not attained the efficiencies to offer as substitutes while nuclear energy contain risks of accidents though offering big advantages otherwise.

This winter, predicted to the harshest in 100 years, would drive in the last nail in the global warming scam. After this the world will be firmly within the global cooling orbit for at least the next 25 years. With the scam over, the India government should remove the cess on coal impose earlier this year along with the subsidies for renewable energy products. We can expect in the coming years, the planned expansion of renewable energy capacity put on hold and only a few pilot projects undertaken to study their efficacy and R&D purposes. 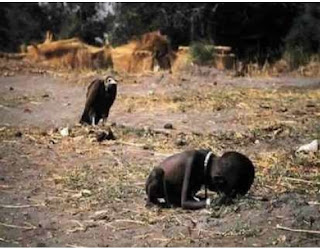 For NGOs, the end of the scam for many is an end of their number one revenue spinner. Christopher Booker sums it rather nicely “The global warming scare may have been fun for the children while it lasted. But the time has come for the joke to be declared well and truly over.” NGOs are however not expected to make a formal admission that their role in this scam is over. But it is only a matter of time their climate staff are given the pink slips, if at all it hasn’t happen already. Most of these redundant staff is unlikely to be re-assigned responsibilities as the scam taint has made them unemployable within the industry, as they become an embarrassment for both the organization and the entire sector.

It is apparent that for a long, long time, NGO advocacy on any issue is not going to have a cutting edge as questions are expected to be frequently raised on their judgement of issues and competence in engaging in issues that based on science or technology. Lest we forget, is the image above. Such themes are commonly used by NGOs to raise funds and create awareness on the spectre of increasing hunger in the world. The same images will come back to haunt them. This would be the  true cost of the scam - their guilt of contributing to hunger, food riots and escalating food prices in the third world and diversion of scarce resources in the third world for solving an imaginary problem - global warming. At least, Al Gore had the humility to apologise for the promotion of bio-fuels. NGOs do not seem to have the same character and integrity as Gore demonstrated. They rather have this crime haunt their conscience.