Cancún hit by coldest ever December. Who says Gaia has no sense of humour? 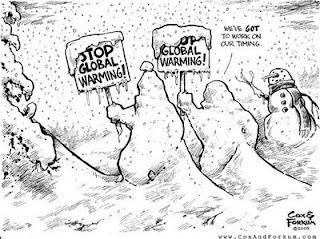 For several years now, we sceptics have bemusedly eyed a phenomenon known as “The Gore Effect”, in veneration of Global Warming’s High Priest and US ex-Vice President, Al Gore.  It describes almost a seemingly causal relationship of temperature decrease whenever global warming or when a global warming event is held. The Gore Effect" has rather a long and uniquely entertaining history. In simple terms, it strikes the warmists whenever and wherever they gather as if Mother Nature herself is mocking their climate hysteria. There’s however no scientific proof that The Gore Effect is anything more than a humorous coincidence.

“You can’t fool Mother Nature. We used to kid in forecasting that whenever we were very certain about a major forecast, it would wind up being so dead wrong that we’d be embarrassed. It certainly makes you think.”

"Tracking The Gore Effect doesn’t contribute much to the actual making of policy.  But it can be fun.”

Denmark has a maritime climate and milder winters than its Scandinavian neighbours. It hasn’t had a white Christmas for 14 years and only had seven last century. Yet, last year, temperatures fell as low as minus 8 Celsius forcing climate justice activists, who came to Copenhagen little prepared for such “climate, to rush to buy warm wear at exorbitant prices.  And as world leaders flew into Copenhagen to discuss a solution to global warming they faced freezing weather as a blizzard dumped 10 centimeters (4 inches) of snow on the Danish capital. Obama still managed to cobble a “feeble” agreement in Copenhagen which he is, of course, termed as “unprecedented.” Nancy Pelosi, the then Chair of the House of Representatives and the large US congressional delegation cut their trip short to beat the snow. Obama stayed a little bit longer, but even he ended up departing early. TV news channels captured him on tape rushing past a host of journalists to leave the snow-covered Copenhagen summit just in time to catch the East Coast blizzard.

“Because of weather constraints in Washington, I am leaving before the final vote."

the President said as an explanation that caused a burst of laughter for shivering flock of journalists covering the event.  Reports the New York Times

“Obama landed at Andrews Air Force base at 1 a.m. Saturday and the encroaching weather led him to take a motorcade rather than the usual helicopter hop to the White House.”

And by the time, he reached the snow deluged White House, he gained a much deeper understanding why it was called just that - the White House!

This is why we sceptics cannot but just love the Gore Effect. And while global warmists anxiously waited for a Global Climate Treaty, we on the other hand waited with bated breath for the Gore effect to play out. Cancún has a tropical climate, specifically a tropical wet and dry climate with little temperature differences between seasons, but pronounced rainy seasons. The city is warm year-round, and moderated by onshore trade winds, with an annual mean temperature of 27.1 °C (80.8 °F). This placed the odds stacked heavily against a Gore Effect strike Cancun. And yet, it didn’t fail us. For six consecutive days during the Cancun Meet, temperatures hit a 100 year low! 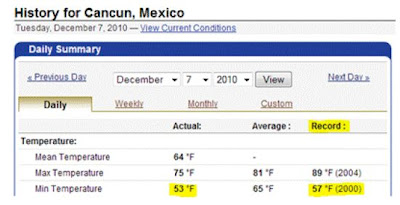 Dr. Roy Spencer, ex-NASA and well known astro-physicist who was in Cancun writes in his blog:

“Today’s my first full day in Cancun at COP-16, and as I emerged from my hotel room I was greeted by a brisk, dry, cool Canadian breeze. It was 54 deg. F (12.2 C) in Cancun this morning — a record low for the date. (BTW, Cancun is nowhere near Canada).Al Gore is not supposed to be here…but it could be that the Gore Effect has announced his secret arrival. We will check into this”

“I’m here at the UN’s Cancun Climate Conference—or COP16 (Conference of the Parties) in the jargon.  The last two COPs in Poznan (2008) and Copenhagen (2009) were (ironically) characterized by exceptionally cold weather.  I can’t say that there’s December snow in Cancun, but locals tell me it’s exceptionally cool for the time of year.  But then again, that’s Climate Change for you! This is the world’s travelling circus; the moveable feast; the great eco-love-in.  We have some 15,000 delegates (including me — I’m accredited for the EU which is a great irony since I am hugely sceptical of the EU as well as the myth of man-made climate change).  Of course 99% of the delegates are paid-up true believers in Al Gore’s Great Climate Myth, so everyone here agrees with each other, reinforcing their opinion that Al Gore’s view is the only sane view to have.  I take a profoundly different view though.”

The Cancun Meet started with an invocation to Mayan Goddess, Lxchtel. Doug Powers writing in a blog cheekily commented:

“One thing’s for certain: Lxchtel, the Mayan Moon Goddess to which the global warming summit people are praying, is not only wearing her insulated bra and heated underwear in Cancun this week, but she also has a helluva sense of humour”

Is Gaia, the Greek Goddess personifying Earth, often called Mother Earth, trying to tell global warmists something significant through the Gore Effect? Till recently, global warmists tried very hard not to take the hint. No more. Enter George Monbiot - author and columnist for the Guardian, and the recipient of a United Nations 500 award for environmental achievement.

Among his bestsellers was The Age of Consent: a Manifesto for a New World Order and Captive State. Monbiot is often considered the Pope of the journalist community of the Global Warming world and arch rival of James Delingpole, in our own sceptic camp. Monbiot recently wrote in the Guardian a post entitled “Cancún climate change summit: Is God determined to prevent a deal?” :

“Every time anyone gets together to try to prevent global climate breakdown, He swaths the rich, densely habited parts of the world with snow and ice”

Monbiot is apparently greatly depressed by the worst winter in 100 years that hit the Northern Hemisphere that coincided with the Cancun meet. What he doesn’t realise is that plunging temperatures so far is just a foretaste of what is yet to come in January-March. So what can we expect from Monbiot in the months ahead? From depression to a complete nervous breakdown??

Posted by Rajan Alexander at 12:07 PM