Cyclone Phailin poised to be the strongest cyclone ever measured in the Indian Ocean?? 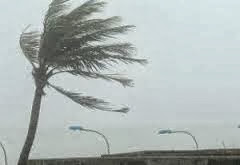 The IMD continues to maintain Cyclone Super-Cyclone Phailin will be a Category 4 Cyclone and not in the clas of a Super Cyclone. And yet in their latest forecast they predict sustained wind speeds will touch 220 kmph on landfall - Super Cyclone class!

"A recent satellite estimate put Phailin's current intensity on par with 2005's Hurricane Katrina in the United States and just barely stronger than the 1999 cyclone at its peak. That would mean Phailin could be the strongest cyclone ever measured in the Indian Ocean."

Cyclone Phailin has entered its matured stage. In satellite images the cloud field is highly organised and very symmetrical. The intense character of Cyclone Phailin is characterised by circular area of widespread thunderstorms containing a distinct round eye. The surrounding convective bands are tightly coiled. Typically such a severe cyclone spends just a day or so at maximum intensity before it begins to weaken, unless the cyclone remains in a highly favourable environment.

However, environmental conditions are ripe for the storm to maintain its strength if not intensify further. Water temperatures are very warm and there is little hostile wind shears. Waters over the Bay of Bengal are exceptionally warm right now—more than 28°C, which is the generally agreed upon threshold above which rapid intensification of tropical cyclones is most likely.

Posted by Rajan Alexander at 4:01 PM