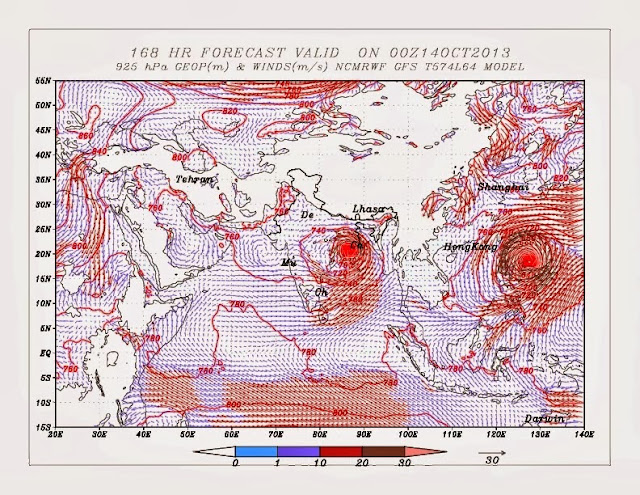 PHAILIN is expected to strengthen further [sustained wind of 270-275km/hr, wind gusts of up to 330km/hr ] and would likely make landfall with super cyclonic force.

The potentially deadly storm WILL impact East India’s entire coastline, as well as most of Bangladesh.

All 14 coastal districts in Odisha have been put on high alert, five of them – Ganjam, Gajapati, Khurda, Puri, Jagatsinghpur – expected to be worst hit.

Andhra Pradesh government has put the navy, army and air force on standby for emergency and relief operations.

The 1999 Odisha cyclone was the deadliest tropical cyclone to hit India since 1971. The Category Five super storm made landfall just weeks after a category 4 storm had hit the same region.

The deadly cyclone hit India on October 29, 1999 with sustained winds of about 250km/hr, killing an estimated 15,000 people and carving a path of destruction.

Posted by Rajan Alexander at 12:42 PM