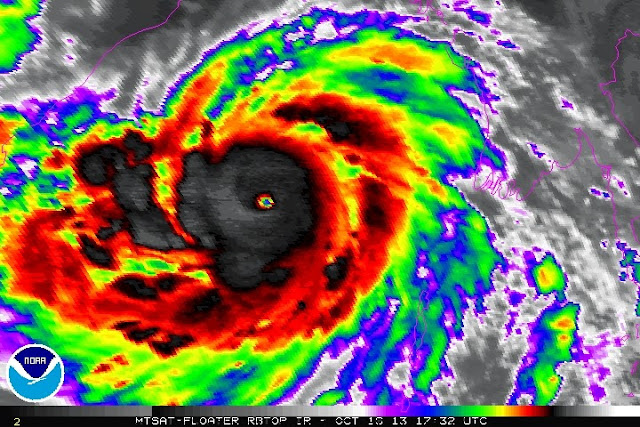 (WashingtonPost) In the last 18 hours, Phailin’s peak winds have increased an astonishing 80 mph (or 70 knots), a rare rate of intensification.

“Based on satellite estimates, maximum sustained winds are now easily around 160 mph (140 knots),”

says Ryan Maue, a meteorologist at WeatherBell.com, a private forecasting services company. Those wind speeds would make Phailin the equivalent of a category 5 hurricane, capable of catastrophic damage.

Phailin is not only intense, but also large. “It’s equivalent to Katrina in size,” Maue says. 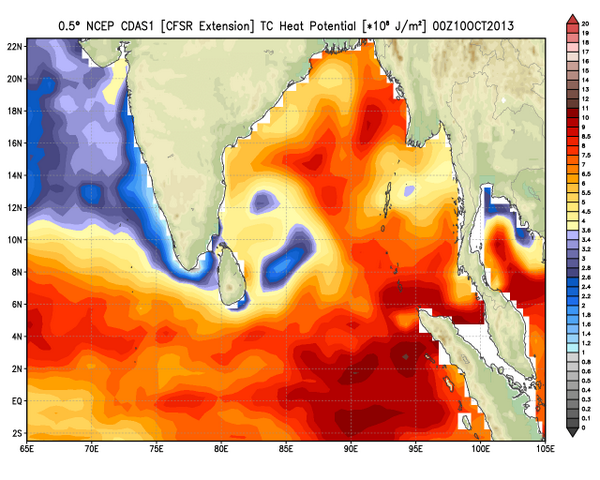 Environmental conditions are ripe for the storm to maintain its strength if not intensify further.

Water temperatures are very warm and there is little hostile wind shear.

“Except for an eyewall replacement cycle, that’s the only thing that could stop it,” Maue says. “I don’t see any dry air. It’s outflow is nearly perfect. The ocean heat content all the way to the coast will be the same [as the content supporting its current strength] or even higher…”

Meteorologist Jeff Masters warns cyclones that form over the Bay of Bengal have a history of producing devastating cyclones.

In 1999, the Odisha cyclone – taking a similar course to Phailin  – made landfall as a category 4 cyclone with 155 mph sustained winds. The storm killed approximately 15,000 people.  Many perished from the storm surge – the wall of water pushed ashore by Odisha’s winds – of up to 26 feet.

Storm surge, likewise, poses the biggest danger from Phailin due to the low lying terrain at the coast that could easily be inundated.  The strength of Phailin’s winds and its mammoth size are likely to generate a massive surge.

“A worst case scenario would have Phailin tracking slightly eastward of its current forecasted track, toward Kolkata and the Ganges Delta of Bangladesh, which is home to tens of millions of people living just a few meters above sea level,” notes Qz.com meteorologist Eric Holthaus.

Posted by Rajan Alexander at 9:04 AM