Joe Bastardi: Anything Can Happen and Probably Will And CO2 will be blamed 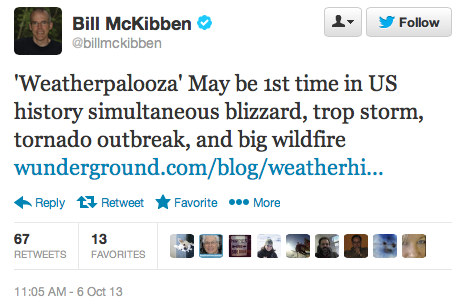 (PatriotPost) I am going to do something a bit different here for Patriot Post readers. With the upcoming winter looming and the climatic ambulance chasers laying in wait for anything that happens anywhere as evidence to prove their point, I thought it would be nice to give an example of how no matter what happens, it will be repackaged as proof humans are wrecking the climate. It seems like a new strategy has evolved – using people that really don't know the weather and climate, repackaging knowns and then claiming it is some big discovery that backs their idea. I used an example last week: The “hidden heat” in the ocean which Dr. Bill Gray explained over 30 years ago with his ideas, forecasting the current overall weather pattern that lead to the increase in hurricane activity.

Look at this example: a tweet from the head of 350.org, Dr. Bill Mckibben:

(In case you want to go to their site, here it is. I want to be as fair as possible here, and nothing can be more fair than you looking at exactly what they are about and the people that make up their team.)

Dr. McKibben apparently ignored, or did not know, about the forecast I made a week before when I asserted that what I was most sure of is that climatic ambulance chasers would use the tropical storm and snowstorm occurring simultaneously as an example of … whatever it is they are pushing. More predictable than the weather is the prostitution of weather events by these people – events those of us that have loved and studied weather and climate all our lives know about.

1.) The snowstorm was a record breaking early season event associated with cold air. For it to snow that much this early, we have to have well below normal temperatures. It occurred in an area of the nation where late season cold was delivering snow into May. So let me get this straight: Late season, followed by early season cold, are somehow indicative of the whole global warming disaster?

2) And what about Tropical Storm Karen? Apparently Dr. McKibben was not aware of the reason Karen was unusual. It is very rare for a tropical cyclone in the Gulf of Mexico to not make landfall as a tropical cyclone. In other words, what happened with Karen is evidence against what he is trying to push. The storm died in the Gulf, though its ghost is delivering more wind and rain to the Mid-Atlantic states now than it ever did in areas of the Gulf Coast under a hurricane watch. But facts mean little to these people. Grab the headline and never mind the truth.

(Side note: The propaganda about the latest F5 ever in May so far south, which was downgraded to an F3, failed to mention the cause of it – the result of a major cold trough abnormally far south. What was remarkable about it, had it been an F5, is the fact that it was so late and so far south because it was so cold.)

3.) We had a tornado outbreak in the Plains last week. I guess Dr. McKibben is unaware of the second season that occurs with tornadoes. As the upper jet starts to intensify in the Fall, and the upper air temperatures fall, warm humid air masses can come in off the Gulf of Mexico. The result is a spike in the number of tornadoes in October and November. In fact, the second season is particularly dangerous because often times these tornadoes occur at night. Houston, Texas was hit on November 16, 1993, in front of the nasty winter of 93-94 across the US; Huntsville, Alabama, by an F4 on November 15, 1989 (the following December was one of the coldest on record, by the way); Shreveport, Louisiana, December 3rd, 1978, again in front of a major cold winter. Interestingly, if I were him, given the lack of tornadoes this year, I would be worried the occurrence of twisters late in the season would be a harbinger of a cold winter. But then again, I am sure a cold winter would simply be twisted into more evidence that we are heading for a CO2-fueled climatic disaster.

4.) And then there's the wildfires. We have a near record low year, yet the wildfires that are showing up are used as evidence of the weather going wild? Again, never mind we are so far below normal that the opposite is more of an option to a rational person.

But is there anything truly rational about a group that thinks no matter what happens, it shows they were right, even if it's the opposite? You make the call on that.

Posted by Rajan Alexander at 5:27 PM