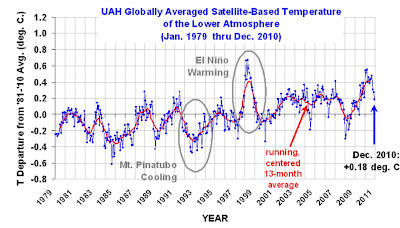 “Until September, 2010 was giving 1998 a neck-to-neck fight for the distinction of the warmest year in recorded history. The contest has now ended. 2010 flattered to deceive as it ended up exhausted in the last leg, and for all practical purpose, given up the race.”

The quote was from our archives with date line November 2, 2010. As the Dr Roy Spencer's graph indicates, we now have the official confirmation that the distinction for being the warmest year in recorded history remains 1998. According to UAH (satellite) data, 1998 (+0.424 deg. C) barely edged out 2010 (+0.411 deg. C), which suggests a whisker of a win for 1998. The margin 0.01 is not statistically significant but what is significant is that for the last 12 years, there is no evidence of accelerating global warming trend. There is of course an underlying warming trend since 1979, but it is not linear, and basically flatlined over the last 12 years.


When the climatic phenomenon, Pacific Decadal Oscillation (PDO) is positive as it was during 1977-2006, the El Nino occurs once every 3-4 years and one out of every four occurrences are usually strong. La Nina’s are less frequent when PDO is  positive. The PDO has switched back to a negative mode in 2006 and normally remains in that mode for 25-30 years during which El Nino occurrences are rare and La Nina’s more frequent. 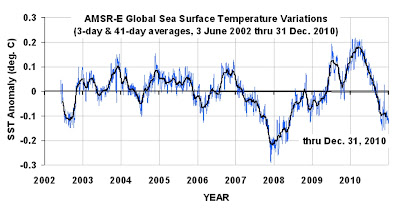 If 2010 is one of the warmest in recorded, then 2011 is likely to be one of the coldest as evident from Dr Roy Spencer's comments:

“The following plot shows global average sea surface temperatures from the AMSR-E instrument over the lifetime of the Aqua satellite, through Dec 31, 2010. The SSTs at the end of December suggest that the tropospheric temperatures in the previous graph still have a ways to fall in the coming months to catch up to the ocean, which should now be approaching its coolest point if it follows the course of previous La Nina’s”

The Politicization of Global Temperature Anomaly

Satellite temperature measurements have been obtained from the troposphere since late 1978. Accordingly, satellite temperature records are of the lower- or mid-tropospheric temperatures and not those of surface temperatures as they do not directly measure temperature. They instead measure radiances in various wavelength bands, which must then be mathematically inverted to obtain indirect inferences of temperature. The resulting temperature profiles depend on details of the methods that are used to obtain temperatures from radiances. As a result, different groups that have analyzed the satellite data have obtained different temperature trends. Two most well known systems are University of Alabama in Huntsville (UAH) and Remote Sensing Systems (RSS).  However as seen from the graph below, RSS data strongly correlates with UAH data, confirming 2010 losing out to 1998 in the race for the warmest year in recorded history. 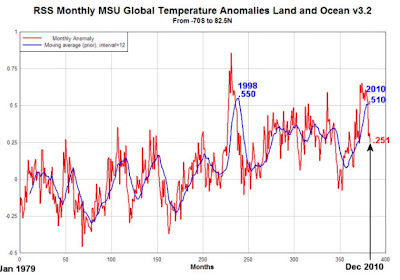 It is to be remembered that global average temperature exists only as a theoretical concept. If we were able to place a large number of sensors around the world at regular spacings, only then could we be able to establish a meaningful estimate of the instantaneous average, which could then in turn be averaged over a year to produce a number that is a reasonable representation of the thermal state of the surface of the planet.

Unfortunately, such a ground station network does not exist. Not only are the existing sensors poorly distributed, many are placed in thermally atypical sites such as cities and airports, others are in primitive rural areas where they are poorly maintained. Ironically though, it is over the oceans that the most discrepant surface measurements occur. Thus surface weather stations provide a very poor basis for determining average global temperature and the gap is thus filled in by satellite temperature measurements, which is considered more reliable.

Surface measurement systems however are still widely used in study of climate. HADCRUT and GISS are two such widely used surface measurements systems. HadCRUT is the dataset of monthly temperature records formed by combining the sea surface temperature records compiled by the Hadley Centre of the Met Office and the land surface temperature records compiled by the Climatic Research Unit (CRU) of the University of East Anglia. HadCRUT’s dataset for the whole year of 2010 is not out yet. But from what is available, HADCRUT as seen in the graph below follows a sharp downturn in global temperatures from August this year as in the case of RSS/UAH data and 2010 are most likely to end as either  second or third warmest year in their records. 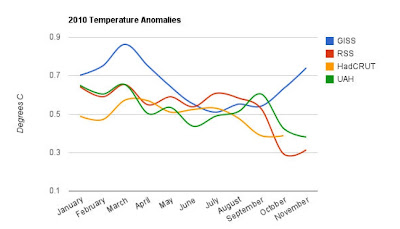 The only deviation among the major systems is shown by NASA’s Goddard Institute for Space Studies (GISS) dataset that unbelievingly depict global temperatures steeply rising from August this year (blue curve). GISS is run by Dr. James Hansen and widely expected to declare 2010 as the warmest year in recorded history. 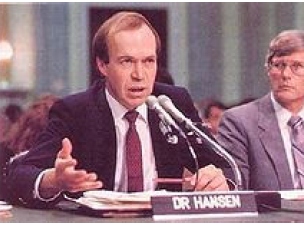 Hansen has become an activist for action to mitigate the effects of climate change, which on several occasions has led to his arrest, including some months back. In 2003 Hansen wrote a paper called “Can We Defuse the Global Warming Time Bomb?“ where he argues that human-caused forces on the climate are now greater than natural ones, and that this, over a long time period, can cause large climate changes. During his testimony before the Iowa Utilities Board in 2007, Hansen likened coal trains to "death trains" and asserted that these would be "no less gruesome than if they were boxcars headed to crematoria, loaded with uncountable irreplaceable species." In response, the National Mining Association stated that his comparison "trivialized the suffering of millions" and "undermined his credibility."

Hansen in his 2009 open letter to President Obama advocates a "Moratorium and phase-out of coal plants that do not capture and store CO2." In his first book Storms of My Grandchildren, similarly, Hansen discusses his Declaration of Stewardship the first principle of which requires "a moratorium on coal-fired power plants that do not capture and sequester carbon dioxide.” Hansen also has spoken against cap and trade, instead advocating what he believes would be a progressive carbon tax at source carbon as oil, gas or coal, with a 100% dividend returned to citizens in equal shares.

Because of this background, climate sceptics demand that Hansen should not be in charge of GISS temperature records because he is so hyper partisan regarding global warming.  But “climate justice activists” love him as he continues to provide them fodder to keep their global warming myth going as a lucrative scam.

So no surprise here if GISS declares 2010 as the warmest year and climate justice activists” latch on to this claim, just as a drowning man clutches to floating straws. But the latter should keep in mind one thing: Hansen is a marked man when The Republicans take over the House of Representatives this year. They are expected to not only investigate Hansen but also GISS temperature manipulations. Poor Hansen may also face a jail term!

Posted by Rajan Alexander at 8:58 PM