The Gillard government after introducing the carbon tax finds its popularity slide to a record low - trailing its principal opposition party by 19%. The Australians are only reacting to an attempt by the ruling Labour Party to reduce their country to a third world economy by introduction of a regime of harsh taxation in the name of climate change.

Let it be a warning to all other governments. Introduce carbon tax and lose instant popularity. 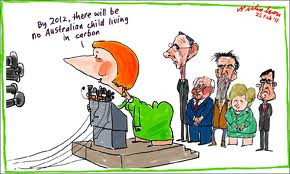 Support for Australian Prime Minister Julia Gillard’s Labour Party hovered near a record low in the latest opinion survey ahead of elections required by the end of next year.

Labor’s support rate of 29 percent trails Tony Abbott’s Liberal National coalition by 19 percentage points, unchanged from the previous survey last month, according to a Newspoll published in the Australian newspaper. On a two-party preferred basis, which takes into account the country’s preferential voting system, backing for Labor increased by two percentage points to 44 percent compared with the opposition’s 56 percent.

After fending off a leadership challenge by predecessor Kevin Rudd in February, Australia’s first female prime minister is focusing on delivering on her pledge to end four years of deficits in the fiscal year that begins July 1. A landslide loss for Labor in last month’s Queensland state election left Gillard with allies governing two of the nation’s six states.

“No matter what the government does or says, voters just don’t seem to be listening,” said Zareh Ghazarian, a political analyst at Melbourne’s Monash University. “The worrying thing for Labor is there doesn’t seem to be anything on the horizon to change their minds.”

The Newspoll survey of 1,205 people, conducted April 13-15, had a margin of error of plus or minus 3 percentage points. Gillard trails Abbott as preferred prime minister by two percentage points, according to the survey.

Support for Labor hit a record low of 26 percent in a Newspoll taken on Sept. 16-18 last year.

Posted by Rajan Alexander at 2:47 PM