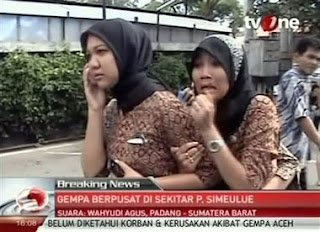 According to the US Geological Survey, a magnitude 8.6 earthquake has struck off the coast of Sumatra in Indonesia at 6:38pm tonight AEST. For more information see the US Geological Survey website. Below seismologists and tsunami experts from Australia, America and the UK respond. The Pacific Tsunami Warning Centre has a warning in place. The Australian Tsunami Warning Centre has not issued any warnings for Australia at this stage.

“According to the USGS website the magnitude 8.7 earthquake occurred well offshore, at least 300 km west of Sumatra so the damage onshore on Sumatra is likely to be minimal. The magnitude may well be decrease to 8.5 or 8.4 after more analysis. The epicentre is well west of the plate boundary and in the Indian Ocean, a fracture along the hinge where the subducting slab of oceanic crust starts bending downward and under Sumatra.

The mechanism seems to have been predominantly strike-slip ie no substantial vertical displacement of the sea floor so any tsunami would be small and local.”

Professor James Goff is Director of the Australia-Pacific Tsunami Research Centre and Natural Hazards Research Laboratory, University of New South Wales.Note that Professor Goff is currently in the Cook Islands and so has limited availability for interviews.

“Like everyone else who just heard this news, we are now waiting to see what comes to pass. BUT, the tsunami warning system has worked well, and a tsunami watch is in place. Many people have self-evacuated and fortunately, because of the incredible amount of tsunami-related work in the region, since the massive 2004 event authorities and the general public are considerably better prepared this time. Those of us who are not in the region at the moment will now be monitoring developments over the next few hours.

It appears to be a strike-slip fault which means that it is unlikely to generate a large tsunami, but then we hear that at least small ones have been reported. Of course such a large shake could generate submarine landslides (like in Haiti) which can also generate tsunamis. We continue to watch.”

Professor Kevin Furlong from Pennsylvania State University is currently in the US and is working with the US Geological Survey on this disaster. He is available for interview over the next 8 hours.

This earthquake reflects a style of faulting (strike-slip) which involves principally horizontal motion, and thus is unlikely to generate a significant tsunami; although very strong ground shaking would be felt on Sumatra. This is also an extremely large magnitude earthquake for this style of faulting, meaning that it likely involved substantial fault movement, and the fault likely extends for 200+ km This earthquake is of the same style of faulting and in approximately the same location as a Mw 7.2 earthquake on January 10, 2012.

Although this earthquake was within the Indo-Australian plate, any earthquake of this size will change the stress regimes acting on the nearby plate boundaries. The result is that stress conditions on the subduction plate boundary beneath Sumatra have changed, although the implications of that change are uncertain.”

“This earthquake (M8.6) and following major aftershock M8.2 may be located at a splitting boundary that indicates the Indo-Australian Plate is splitting into two plates – the Indian plate and Australian plate.

If so, the mechanism would be different from the previous major Sumatra subduction earthquakes such as M9.1 in 2004 and thus a tsunami generated by the current earthquakes (M8.6 and M8.2) should not be that severe.”

Comments from UK experts (collated by our colleagues at the UK Science Media Centre): Dr David Rothery runs the Open University’s Volcanoes, Earthquakes and Tsunamis course in the UK

“Today’s M8.7 quake in the Indian Ocean offshore of Sumatra has the potential to cause a tsunami that could cause devastation to coasts all around the Indian ocean. A tsunami warning from the Pacific Tsunami Warning Centre predicts tsunami wave arrival at Banda Aceh (Sumatra) 10:31 BST, and Sri  Lanka between 11.30 and 12.30 BST.http://ptwc.weather.gov/ptwc/text.php?id=indian.TSUIOX.2012.04.11.0845

A tsunami detection buoy (a DART station) in the Bay of Bengal http://www.ndbc.noaa.gov/station_page.php?station=23227  detected a wave with amplitude of 30 cm in deep water (see figs below), which has the potential to become several times higher as it approaches the shore.

Today’s quake was probably about ten times less energetic than the M9.1 quake that caused the 26 Dec 2004 Indian Ocean tsunami. In addition, the nature of the quake, on the bending Indian ocean floor as it approaches the Sunda Trench (rather than a megathrust quake in the trench itself) may mean that the displacement of water to trigger the tsunami is less bad; the motion of the sea bed is different to that which occurred in 2004.”

Posted by Rajan Alexander at 6:54 PM