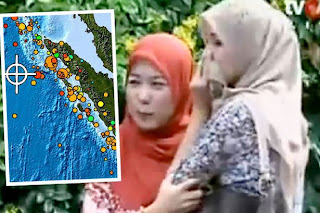 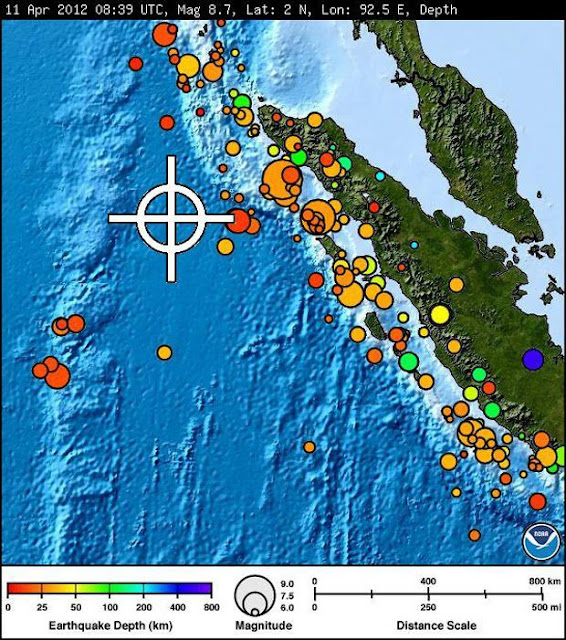 An earthquake with a magnitude of 8.7 has struck under the sea in Indonesia triggering a tsunami warning across the Indian Ocean region.

The quake hit 308 miles from the provincial capital of Banda Aceh and triggered widespread panic as residents along coastlines fled to high ground in cars and on the backs of motorcycles.

Some were crying. Others screamed "God as great" as they poured from their homes.

The quake struck as Prime Minister David Cameron arrived in Jakarta, Indonesia for the latest leg of his South East Asia trade mission.

The PM is 1,600 miles south-east of the province and on a different island, Java.

A spokesman for Indonesia's Meteorology and Geophysics Agency, said a tsunami warning has been issued for cities all along the coast of Sumatra island.

There was chaos in the streets, with fierce shaking continuing for nearly four minutes.

Timbang Pangaribuan told El Shinta radio from the city of Medan: "I was in the shower on the fifth floor of my hotel. "We all ran out. ... We're all standing outside now."

He said one guest was injured when he jumped from the window of his room.

The tremor was felt in Singapore, Thailand, Bangladesh, Malaysia and India. High-rise apartments and offices on Malaysia's west coast shook for at least a minute.

Posted by Rajan Alexander at 4:17 PM