Rule on monsoon forecasts to be eased

This is proving embarrassing. There actually exists a law prohibiting private agencies from forecasting the monsoon. This means that people like Rajesh Kapadia and me are law breakers as we published our monsoon forecasts! But there is good news. A change in a decade-old rule will allow private organizations in the country— and not just the India Meteorological Department (IMD)— to issue monsoon forecasts. Phew! 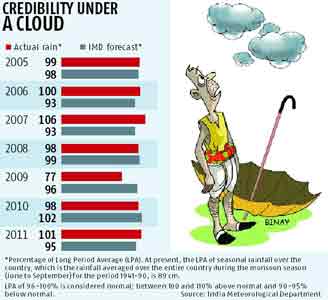 New Delhi: A change in a decade-old rule will allow private organizations in the country— and not just the India Meteorological Department (IMD)— to issue monsoon forecasts.

“From this year or the next, other organizations could publicize their monsoon forecasts too,” said an IMD official, who didn’t want to be identified.

The met department will continue to be the official forecaster, the official said, although its predictions in the past have sometimes proven to be inaccurate.

The change in rule would be a vital first step in estimating the capabilities of organizations other than IMD in predicting monsoon rainfall, at least two experts said.

India’s summer monsoon, occurring between June and September, accounts for 80% of the country’s annual rainfall, making it critical for the farm sector, which sustains at least 60% of its 1.2 billion population.

Accurately forecasting rainfall patterns, especially in June and July, when the summer crop is planted, thus assumes vital importance for the majority of the people, although the share of agriculture in gross domestic product is only 17%.

Since 2002, when IMD’s prediction for a normal monsoon went remarkably awry—a 10% shortfall when it predicted the rainfall to be in excess of the normal 89cm—the department has been trying to develop so-called dynamical models.

India now relies on a statistical, or synoptic, approach that correlates rainfall with specific atmospheric and ocean conditions, such as temperatures in the Pacific and snowfall in Europe and Asia.

The dynamic models, in contrast, try to simulate the state of the atmosphere at a particular time and then extrapolate. Their accuracy in estimating climate conditions depends on the use of supercomputers, equations that govern how fluids flow, and exhaustive land and sea surface temperature data to predict the course of the monsoon.

Indian institutions such as the Centre for Mathematical Modelling and Computer Simulation, the Indian Institute of Tropical Meteorology (IITM) and the National Centre for Medium Range Weather Forecasting, all of which are state-funded institutes, have been working on dynamic models to predict the monsoon.

“Forecasts from other agencies were discouraged because publicizing different forecasts led to a lot of confusion,” said Ajit Tyagi, a former IMD director-general. “But given that several private and international agencies anyway publicize them now, there’s no reason other Indian organizations can’t do the same now.”

IITM’s dynamic model is expected to undergo some critical tests on how reliably it has been able to simulate previous monsoons and indicate droughts, Mint reported on 5 April. If it works satisfactorily, its predictions may be incorporated into IMD’s official forecast—a key impetus to the relaxations of rules regarding monsoon forecasts.

Allowing other organizations to predict the monsoon will allow an assessment of the quality of forecasting outside the IMD institutions, according to D.S. Pai, IMD’s chief forecaster. “Most independent organizations don’t publicize their forecasts consistently,” Pai said. “They only publicize them when they are right.”

Given India’s geographical position, every two in five years see the monsoon rainfall dip below normal, with at least two droughts every decade. “Some international models always predict below-normal rainfall for India, but nobody follows up when the season ends on a normal note,” Pai said.

This year, too, while the IITM model predicts normal rainfall, two previous estimates out of Japan and the US in February have indicated “weak rainfall” during this monsoon.

More forecasts aren’t necessarily better, said B.N. Goswami, director, IITM. “There are limited capabilities in terms of manpower and computing facilities in India,” Goswami said.“I don’t really think that we are going to have a surfeit of forecasts, even with these relaxations, any time soon.”

Posted by Rajan Alexander at 9:33 PM