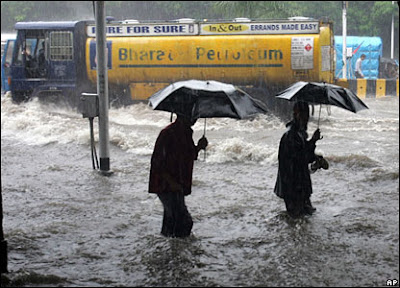 India's monsoon is likely to have average rainfall in 2012 despite fears the El Nino weather pattern may emerge in the second half of the season, the country's top weather official said, pointing to a third straight year without drought.

The June-September monsoon, vital for agricultural output and economic growth, irrigates around 60 percent of farms in India, the world's second-biggest producer of rice, wheat, sugar and cotton. Agriculture accounts for about 15 percent of India's nearly $2 trillion economy, Asia's third biggest.

"Rains could be normal this year due to the absence of any strong signal that could inhibit occurrence of a healthy monsoon," L.S. Rathore, director-general of the state-run India Meteorological Department (IMD), told Reuters in an interview.

The IMD forecast is the basis for the government's official forecast which will be released in the last week of April with more details.

According to the IMD classification, rains between 96-104 percent of a 50-year average of 89 centimetres are considered normal. The last time there was a drought with rains below this range was 2009 and before that, in 2004.

For a graphic on India monsoon - forecast vs actual, click link.reuters.com/xux88r

"The apprehension that the El Nino will impact the monsoon badly seems misplaced as this weather pattern is likely to emerge only towards end-August which is one of the two wettest months. Besides, El Nino is just one of the many factors that come into play," Rathore said.

El Nino, an abnormal warming of waters in the equatorial tropical Pacific, is linked with poor rains or a drought-like situation in southeast Asia and Australia.

The La Nina weather pattern, which is associated with heavy rains in south Asia and flooding in the Asia-Pacific region and South America, and drought in Africa, ended in March.

In the interim before El Nino appears, Rathore said a neutral condition continues over the tropical Pacific.

"On a number of occasions, monsoon turned out to be normal despite the emergence of El Nino. There is no direct, one-on- one relationship between the success of the monsoon and the occurrence of El Nino," he said.

Last month, the Australian Bureau of Meteorology said climate models indicated that the La Nina weather pattern had come to an end.

According to the weather office, the El Nino weather pattern was present in 13 of the 20 drought years in the past 111 years.

"Although I cannot talk about this year's monsoon forecast now, as it due between April 25 and April 28, what I can say is there is no cause for concern at all," Rathore said.

India's economy grew by 6.1 percent in the December quarter, its slowest in almost three years. To accelerate that, the central bank on Tuesday cut interest rates for the first time since 2009.

In 2011, the monsoon rains were 101 percent of the long-term average, surpassing the weather office's forecast of 98 percent but still within average levels.

The southwest monsoon rains enter India through the southern Kerala coast around June 1 and cover the entire country by mid-July.

Posted by Rajan Alexander at 2:07 PM