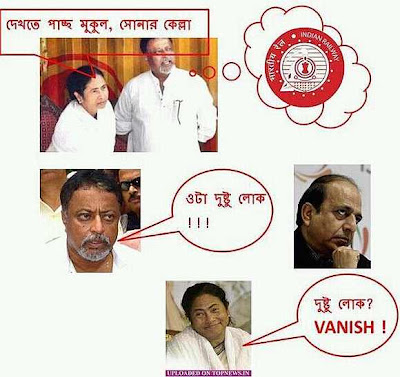 Hers was one of the biggest electoral victory the state of West Bengal had ever seen that prompted the media to hail her as a hope for the common man. Mamata Banerjee has thrown  all this goodwill all away. A year on, she has emerged India’s biggest political disappointment. From a common man’s hope she has revealed herself as just an intemperate despot, a bully, a goon, lacking a sense of humour and anti-thesis of democratic values.

This is the graphic first posted in Facebook that triggered the latest controversy. Notwithstanding the cartoon being distasteful, arresting people for re-posting it in the social media had the whole nation nauseated. What a fall!   Rediff.com reports:

A professor of chemistry of the Jadavpur University was arrested on Friday along with his neighbour for allegedly posting a cartoon on a popular social networking site involving West Bengal Chief Minister Mamata Banerjee, Railway Minister Mukul Roy and former Railway minister Dinesh Trivedi. He was later released on bail.

The cartoon showed the chief minister and the railway minister exchanging dialogues from a popular Bengali film by Satyajit Ray, which alluded to the replacement of Dinesh Trivedi by Mukul Roy as railway minister.

The arrests triggered a reaction from various circles with state labour minister Purnendu Bose justifying the police action. Bose argued that it was not a cartoon, but real pictures, which were nothing but an insult.

"Law will take its own course," he said. Rebel Trinamool Congress MP Kabir Suman, who has fallen foul of party supremo Mamata Banerjee for his controversial statements, slammed the police for making the arrests. "What has been forwarded in the website is aninnocent expression and it is difficult to accept that a person can be arrested on the basis of this," he said.

Educationist Sunanda Sanyal, who has parted ways with Mamata Banerjee in recent time, condemned the arrest and said it was made "on a flimsy ground".

THE TRANSLATION OF THE CARTOON:

The cartoon is a spoof on the dialogues from the film Sonar Kella by Satyajit Ray. It is the story of Mukul, a kid who recalls his past life including a golden fortress (sonar kella). Two goons kidnap Mukul as they hope to unearth the treasure from the house.

In their bid, they attempt to murder a psychiatrist Dr Hajra, who is accompanying Mukul to Rajasthan to find out truths about his past life.

The cartoon is based on a particular scene in the film where one of the goons (played by Kamu Mukherjee) pushes Dr Hajra from a cliff while the other goon starts impersonating Dr Hajra thereafter.
When Mukul asks about the original Dr Hajra, the goons tell him that he was a dushtu lok (a bad person), hence was made to vanish. The cartoon that drew Mamata's ire depicts her pointing at the railways and asking Mukul Roy if he can see the sonar kella?

The next bit of the spoof has Mukul pointing at Dinesh Trivedi and stating, Ota dushtu lok! (That is the bad guy).

Posted by Rajan Alexander at 9:17 PM