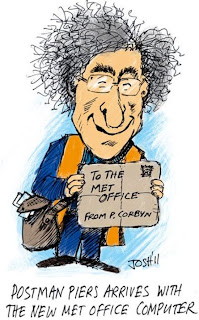 Dr Piers Richard Corbyn is an astrophysicist and founder of the business Weather Action which makes weather forecasts up to a year in advance, and on which he also bets, and wins 80% of the times.

Corbyn's predictions are based on what is called "The Solar Weather Technique." The technique combines statistical analysis of over a century of historical weather patterns with clues derived from solar observations.  He considers past weather patterns and solar observations and sun-earth magnetic connectivity. Conventional meteorology claims that such influences cause minimal impact on the Earth's atmosphere. Corbyn is also sceptical of the theory of Anthropogenic Global Warming. In fact, he is one of the leading climate sceptic scientists in the world.

Piers Corbyn asserts that earthquakes can be triggered by solar activity, and hence that he can to some extent predict them. So he started a trial forecast and here’s one published in March for April this year:

Piers Corbyn once again predicted a high probability of a strong earthquake in the northern hemisphere a couple of days before the Indonesian earthquake happened as evident from his tweet of Apr 9th 2012, 2:22 AM EDT:
Impressive Coronal Holes moving to centre of solar disc for April 9th as we predicted. Coronal holes image is for 8th which means the biggest one will be Earth-Facing (EF) on 9th, the middle of our 8-10th period.
http://spaceweather.com/archive.php?day=09&month=04&year=2012&view=view

Note the official forecasts say to expect solar wind from these holes to hit Earth ~12-13th. This may be true but our work shows the important time for (earlier) influences giving Earthquakes is when the holes are EF, give or take a day.


The point is that earthquake probability is increased when a coronal hole is facing the earth, suggesting maybe an electromagnetic connection. As seen Corbyn predicted that the period April 8 to 10 (give or take a day) would be the timeframe that a large earthquake could strike somewhere along the Pacific ring in the Northern Hemisphere. This prediction was put out to the public back in March, and now brilliantly confirmed.  True that Corbyn did not predict it will hit Indonesia. But “Pacific ring, Northern Hemisphere” is a good broad enough prediction. It has to kept in mind Corbyn’s main profession is to predict the weather not earthquakes. Secondly, it was a trial forecast and when the model gets standardized it will probably be able to predict where the coronal hole of the sun could trigger an earthquake with greater precision.

If you think all this science fiction, here’s a ZeeNews report that suggest otherwise: 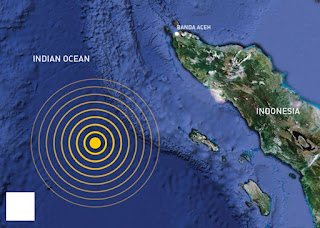 Scientists had been expecting Wednesday's great earthquake off Sumatra but it occurred a little sooner, according to Arun Bapat, an Indian seismologist in Pune.

Bapat is one of the associate scientists of the newly formed International Earthquake and Volcano Prediction Center (IEVPC) based in Orlando, Florida in the United States.

Asked why the IEVPC failed to predict Wednesday's 8.6 Richter earthquake that triggered tsunami fears in Indian Ocean countries, Bapat said they did suspect an impending quake on April 5 itself.
In an email to IANS Bapat said: "We were expecting occurrence of a large magnitude earthquake in Indonesia…. We were debating it and the expected time window was about 10 to 15 days." But it has occurred earlier, he said.

Bapat said he sensed the possible occurrence of the earthquake first on March 21 itself after having observed the satellite picture of the Total Electron Content (TEC). The TEC is the total number of electrons present between any two points in the Earth's ionosphere and is measured as the number of electrons per square meter.

"I kept thinking," Bapat said. "Subsequently on April 5 I had two more satellite photos of TEC. We have been monitoring the TEC every day. We get inputs from Russia."

According to Bapat, it is known that there is a statistical association between large earthquakes and TEC anomalies as changes in the electron concentration occur a few days before earthquake. "It was found during the recent Tohoku (Fukushima) Japan earthquake that the TEC had increased very high," Bapat said. It was about three to four times the normal electron concentration.

Similarly, Kyushu earthquake of March 20, 2005 (M = 6.6) had revealed an earthquake-associated TEC anomaly 11 days before that quake.

Bapat said that from the TEC pictures he obtained (on March 21 and April 5) "it would be seen that the area of potential earthquake epicentre had very high concentration of electrons", suggesting that the Sumatra earthquake was imminent. However, the earthquake came before any warning could be issued.

According to Bapat, the IEVPC warned earlier this week that a major earthquake and possible tsunami will strike Kamchatka Peninsula of Russia between now and the end of June 2012.

Posted by Rajan Alexander at 4:50 PM