East Britain to be hit by the Coldest May in 100 years: Piers Corbyn

This is Piers Corbyn astrophysicist of Weatheraction.com who elaborated: "We are making this headline from our 45day ahead Britain & Ireland forecast public because of its importance... A system of cold air will get stuck over eastern Britain for most of the month.”

So parts of the UK are bracing for the thermometer to plunge as the cool spring turns even chillier. Worst hit will be the East – although summer will be on hold across the entire country.

The freeze follows a miserable April that has seen below-average temperatures, snow and torrential rain. Independent forecaster WeatherAction warned that next month will be the “coldest or near coldest for 100 years” in the East. Forecaster Piers Corbyn said May will bring a “run of bitter northerly winds” with snow at times.

“The changeable theme of Apr looks as though it will be carried forth into May. Although some drier and brighter spells are expected, further rain or showers are likely for most places, accompanied by a chilly feel. There is the chance that pressure may start to build from the SW towards the middle of May, which would settle things down across S and W parts of the country, & as a result rainfall amounts here may end up lower than avg. The N & E look to stay cloudier & wetter than normal, on balance.”

Piers Corbyn is the bête noire of the UK’s Met Office. Three years in a row the Met Office predicted a “mild winter” to be proven wrong by Piers Corbyn, so much so that they (Met Office) gave up predicting seasonal winter forecast altogether, to save themselves the blushes. Last winter was the first time the Met Office did not give their seasonal winter forecast. If they thought it would have saved them further flushes, Piers Corbyn by challenging their short term forecast has thrown a spanner in their works by giving a contradictory forecast.

So just who is Piers Corbyn? Dr Piers Richard Corbyn is an astrophysicist and founder of the business Weather Action which makes weather forecasts up to a year in advance, and on which he also bets, and wins 80% of the times.

Corbyn's predictions are based on what is called "The Solar Weather Technique." The technique combines statistical analysis of over a century of historical weather patterns with clues derived from solar observations.  He considers past weather patterns and solar observations and sun-earth magnetic connectivity. Conventional meteorology claims that such influences cause minimal impact on the Earth's atmosphere. Corbyn is also sceptical of the theory of Anthropogenic Global Warming. In fact, he is one of the leading climate sceptic scientists in the world.

Piers Corbyn asserts that earthquakes can be triggered by solar activity, and hence that he can to some extent predict them. So he started a trial forecast and here’s one published in March for April this year: 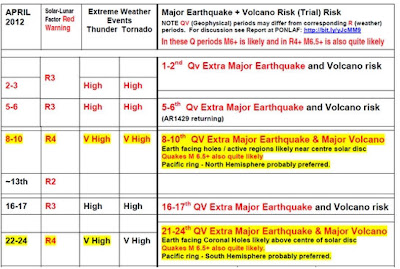 As seen below, he hit the bulls-eye:

Scoring a bulls-eye in predicting the recent Indonesian Earthquake, Piers Corbyn is riding on a high. And just what his statistical confidence levels of his prediction of a May cold cave? “Coldest in 100yrs 80%; In 5 coldest in 100yrs 90%”   If I were a betting man, I would place every £ on his prediction.

Located in the SE of England is Oxford, the headquarters of the NGO, Oxfam, a key cog in the wheel in the global warming scam. So if you are working in Oxfam’s headquarters or planning to visit them in May, you are advised to bring out your woollies!

Posted by Rajan Alexander at 3:04 AM