Climate Alarmists back in business: Hurricane Sandy evidence of Global Warming. Why this is alot of bullshit! 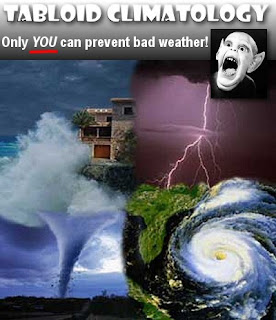 As the global warming scare continues to crumble, its true believers thresh around ever more wildly to claim every “extreme weather event” as proof that their Old Time Religion is still alive and kicking.

Now these climate alarmists have seized on Super-Storm Sandy in North America to dubiously claim it is "evidence" of climate change. We can now expect to see science illiterates in the likes of WWF; Greenpeace; Oxfam; ActionAid; ChristianAid; WorldVision etc given fancy designations such as Climate Advisers to lead such a charge.

If these jokers were really climate literates how come they never dare predict the Indian Monsoon? Still they have the audacity to write policy papers and manuals on agricultural adaptation to climate change! How come we do not see these same jokers giving extreme weather events warnings when they pretend to disaster preparedness expertise?

If Sandy were to be an ordinary Category 1 Hurricane as these jokers are making out to be, it would not have caused the damage it is now causing the East Coast of North America. In fact when it did make landfall, not one of the actual observations showed sustained winds over 50 knots, and that’s a long way from the 72 knots that marks a hurricane. So Sandy made landfall at the most at a strength of only a deep depression. 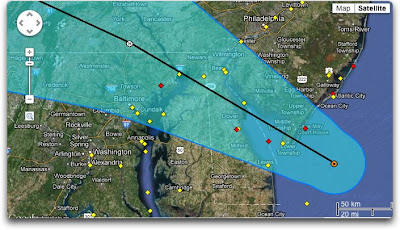 Yet Sandy is being described as a Super-Storm or a freak storm when it merged into what was once two cold weather systems already dumping snow in West Virginia to form what the US National Hurricane Centre calls post-tropical and others call Frankenstorm or Perfect Storm 2 as seen in the Accuweather forecast: 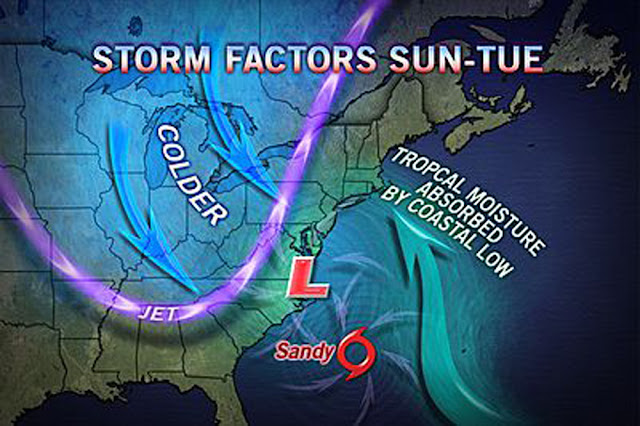 The National Weather Service warned that Sandy is making its way up north the eastern seaboard -- kicking into a hybrid storm that will potentially do damage along coastlines in the Mid-Atlantic and New England:

“The lion’s share of guidance indicates that the circulation associated with Hurricane Sandy will pass close enough to the amplifying polar trough over the eastern United States to become incorporated into a hybrid vortex over the Mid-Atlantic and Northeast next Tuesday,”

The Hydrometeorological Prediction Center forecast in their morning evaluation commented:

"The high degree of blocking from Eastern North America across the entire Atlantic Basin is expected to allow this unusual merger to take place…inviting perhaps the ghoulish nickname for the cyclone along the lines of ‘Frankenstorm.’"

"A one-in-30 year storm, or even in the fact the way this storm is going to be tracking east toward the coastline in New Jersey, it could be a once-in-a-lifetime storm."

While it is true that hurricanes in the Central Atlantic are triggered by warming of the Eastern Caribbean, it has nothing to do with anthropological global warming. This is what a Nature paper by Jeff Donnelly of the Woods Hole Oceanographic Institution said as their core conclusion:

“Over the last 5,000 years, the eastern Caribbean has experienced several periods, lasting centuries, in which strong hurricanes occurred frequently even though ocean temperatures were cooler than those measured today, according to a new study.”

Martin Hoerling, a meteorologist at the National Oceanic and Atmospheric Administration focused on the forces influencing extreme weather:

“Great events can have little causes. In this case, the immediate cause is most likely little more that the coincidental alignment of a tropical storm with an extratropical storm.  Both frequent the west Atlantic in October…

nothing unusual with that. On rare occasions their timing is such as to result in an interaction which can lead to an extreme event along the eastern seaboard. As to underlying causes, neither the frequency of tropical or extratropical cyclones over the North Atlantic are projected to appreciably change due to climate change, nor have there been indications of a change in their statistical behavior over this region in recent decades (see IPCC 2012 SREX report).

This is an excerpt from “Millennial-scale storminess variability in the northeastern United States during the Holocene epoch,” the 2002 paper using lake-bed sediment cores from around the Northeast to generate a Holocene history of storminess:

“Climate models suggest that human activities, specifically the emission of atmospheric greenhouse gases, may lead to increases in the frequency of severe storms in certain regions of the Northern Hemisphere. However, the existence of natural variability in storminess confounds reliable detection of anthropogenic effects.

During the past ~600 years, New England storminess appears to have been increasing naturally. This rhythm in storm frequency may explain some of the recently observed increases in extreme precipitation events. If the pattern of millennial-scale variability that we documented through the Holocene persists into the future, New England storminess would continue to increase for the next ~900 years. Because climate synopses compiled from instrumental records cannot distinguish underlying natural increases in storminess from anthropogenic effects, detected increases in contemporary storminess may not be a reliable indicator of human-induced climate change.” 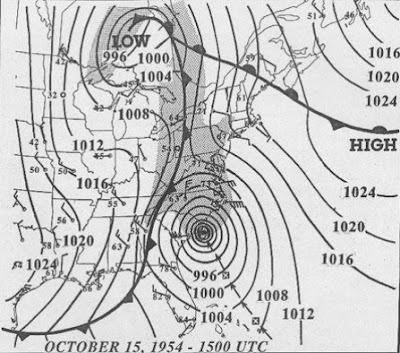 So is Sandy unprecedented? Nope. It happened in 1944, 1950 and 1954. Here are extracts from Steven Goddard of the 1954 which had wind speeds higher than Sandy on landfall:

“Major Frankenstorm Hazel in October, 1954 brought 98 MPH winds to Washington DC – the highest ever recorded. A cold front collided with a major hurricane. No one was stupid enough in 1954 to blame the storm on CO2”

It is another matter that whatever name it visits as, it isn't leaving the Eastern U.S. anytime soon. The storm has now lost its status as hurricane because it no longer has a warm core centre nor the convection — the upwards air movement in the eye — that traditional hurricanes have, but it is still as dangerous as it was when it was considered a hurricane, according to National Hurricane Center spokesman Dennis Feltgen. It tipped into the post-tropical category because it has become

"devoid of thunderstorms near the centre,'' said Ed Rappaport, deputy director of the NHC.

That should mean a storm that is larger in physical dimensions affecting more people, but with weaker peak winds.

Posted by Rajan Alexander at 11:46 AM