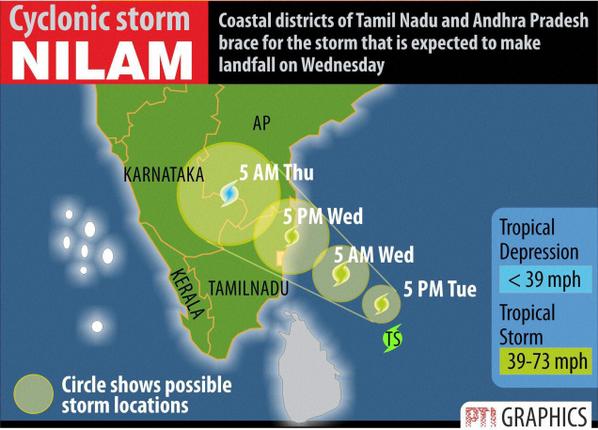 Here are the 10 latest developments on this story:

1.   The cyclone is currently positioned 340 kilometres away from south east of Chennai. It is likely to move in a north-westerly direction and make landfall between Cuddalore and Nellore near Chennai.

2.   With the cyclone approaching the coast, coastal Tamil Nadu, Puducherry and south Andhra Pradesh are expected to witness heavy rainfall over the next 24 hours. The cyclone is expected to touch wind speed of 90 kilometres per hour as it gets closer to the coast.

3.   Low-lying areas of Tamil Nadu like Chennai, Kancheepuram and Tiruvallur districts could be inundated due to the storm surge, officials have warned.

4.  Though the cyclonic storm Nilam has been categorised as "marginal," authorities say they are prepared for the worst. Tamil Nadu government has deputed 13 IAS officers to supervise the preparations and relief work.

5.   There's been no major evacuation so far. However all arrangements are in place. In Chennai, 282 schools will serve as relief centres. Community kitchens have also been arranged. Cyclone shelters have also been organised in Nagapattinam and Cuddalore districts with essential supplies. The government plans to send generators and sand bags to vulnerable areas in the districts.

6.   According to officials, the sea will be "very rough to high" and fishermen in Tamil Nadu, Puducherry and adjoining south Andhra Pradesh coasts have been advised to stay off the sea. Boats have been moved to low-lying areas.

7.   The Chennai port on the southeast coast has stopped cargo operations after a cyclone. The port handles about 10 percent of traffic passing through India's major ports, covering a variety of cargoes including crude oil, petroleum products and agricultural commodities.

8.   Windspeeds can reach upto 90 km in Chennai and there could be some disruption in communication lines, say officials. Danger signals ranging from five to seven have been hoisted at Chennai, Ennore, Cuddalore, Nagapattinam and Puducherry ports.

9.   Normal life in Chennai, Kancheepuram, Cuddalore and Villupuram was hit by incessant rains since Tuesday morning. Schools and colleges are off for today.

10. In Andhra Pradesh, a third warning signal has been issued in Krishnapatnam, Vadarevu, Machilipatnam and Nizampatnam ports while fishermen have been warned not to venture into sea.  Control rooms have been opened in the coastal districts, particularly SPS Nellore and Prakasam, which are expected to face a major impact of the cyclone.

Posted by Rajan Alexander at 9:24 AM