Both the Bay of Bengal and the Arabian Sea are extremely warm and rough. Next week this means possible storms and rains. A western Disturbance is also expected to hit J&K next week. Here is a Rajesh Kapadia of the blog, Vagaries of Weather  giving his forecasts what to expect. 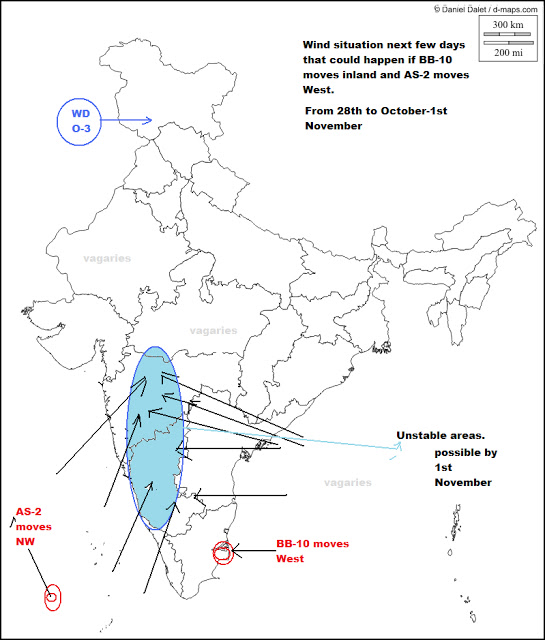 As the system is just South of the favourable ridge (mentioned earlier), it will track West, and due to adjacent wind shear at 20 knts, it will deepen more, and develop a stronger wind force in the Northern semi circle. This semi circle will have winds upto 30 knts, and Chennai will get gusty NE winds of the same speed from Sunday night itself.

BB-10 will move into central coastal TN around Monday night, with centre at Nagapattinum/Karaikal. Heavy falls in Puddukotai and Thanjavur districts. But, rainfall will be increasing throughout the TN regions from Sunday evening, with heavier falls in the Northern coastal regions.

After crossing land, the system weakens.

I personally make it that this system faces multiple problems in its life time !  System faces  stiff resistance from O-3, which is moving Eastwards, will not allow it to track Northwards, but force an Easterly track.

On the other hand, being located far too Southwards, a superb feeding in the Southern semi circle from Southerly winds at 30 knts, will strengthen the Southern quadrant with thick clouding. Problems for the poor guy !!

I feel, it will be forced to track NW  for sometime, and strengthen upto mid Arabian Sea location, and then dissipate in the sea.

From Monday, as BB-10 moves inland.

We, see as a result, Easterly winds along South-East coast of India, to the Mah regions, and South-Westerly wind from AS-2 over the Western side. This creates a line of dis-continuity in the Peninsula and initiates clouding and an unstable atmosphere.

Chennai: Increasing rains from Sunday. Rainfall will be around 30-35 mms on Monday (till Tuesday 8.30 am) with gusty NE winds. Rainfall upto 40 mms continues into Tuesday as well. Decreasing amounts from Wednesday.

Good Showers for Bangalore from Tuesday into Wednesday.

Posted by Rajan Alexander at 2:40 PM