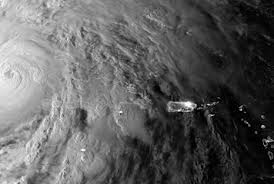 “Sandy though is an overgrown progenitor of Mother Nature, who no one messes with; not even a superpower. As if to remind US Presidential candidates that it is not a good idea to put global warming -- or human aggravated climate change -- on the backburner (as both President Obama and his Republican challenger Mitt Romney have done in this election campaign), Mother Nature appears to have let loose Sandy to deliver a kick in the American gut. The country is bracing itself for it on Monday and Tuesday.

Although it is only a category one hurricane just now, Sandy is being described as the largest storm ever to head to the US. A freak occurence that involves Sandy meeting two winter fronts coming in from the north is expected to bring about a massive churn, the kind never seen before. It has therefore has been dubbed a Frankenstorm. Its footprint is almost half the size of India's landmass, and its cover area when it hits the landmass is so vast, stretching from the Carolinas all the way up the Atlantic seaboard to Connecticut and Massachusetts, and deep into Ohio in the west, that no one is even worrying about where the epicenter will cross over. It's a minor detail.”

It happened in 1944; 1950 and 1954 - when the globe was cooling as it is now. Times of India should send back this journalist to school to learn science. Science fiction is certainly very different from science!!