The Kalpakkam complex houses two 220 MW nuclear reactors, two test reactors and a 500 MW fast breeder reactor scheduled for commissioning in 2013. It is elevated - to protect against lashing waves during high tides. The complex was fortified further after the 2004 tsunami.

Unlike the US, which shut down nuclear plants along its mid Atlantic coast ahead of Hurricane Sandy, the Kalpakkam reactors were operating late Wednesday evening.

This is the umpteenth time in less than a decade that Kalpakkam nuclear plant demonstrated it is absolutely safe.  The first instance was during the 2004 Tsunami, the last was Cyclone Thane and now Cyclone Nilam. In all these instances, the plant never stopped generating power.

This record is an “Inconvenient Fact” to the Kudankulam anti-nuclear movement supported by foreign funded NGOs like Greenpeace.

Fortunately, Kudankulam is expected to come into production by December. 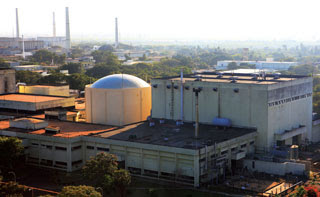 (HindustanTimes) Kalpakkam nuclear complex, located about 70km south of Chennai, is absolutely safe after Cyclone Nilam hit the coastal areas of Tamil Nadu and both the units are operating normally, officials said on Wednesday.

"We are on high alert, adequate additional manpower and resources have been pressed into service and there is absolutely no cause for any concern," he said after a preliminary inspection of the nuclear complex that also houses a fast breeder reactor (500 MW) which is being set up.

"I am standing on the sea shore as the cyclone is crossing and I see no problem whatsoever,"

he told HT over the phone from Kalpakkam. Earlier, plant site director K Ramamurthy, his last day in office after superannuating, in a statement said

"all structures and equipment were designed to withstand even the wind velocity of 160 kmph."

The met office expected wind speeds of up to 80kmph to 90kmph to lash the coast as cyclone Kalpakkam nuclear complex, located about 70km south of Chennai, is absolutely safe after Cyclone Nilam hit the coastal areas of Tamil Nadu and both the units are operating normally, officials said on Wednesday.

"All agencies have been given instructions for remedial measures and kept in standby alert. Additional personnel have been deployed to keep vigil on important systems,"

Ramamurthy said in the statement.


"We do not expect any flooding here due to cyclone," said Prabhat Kumar, chairman and managing director of Bharatiya Nabhikiya Vidyut Nigam Ltd (Bhavini), which is erecting the fast breeder reactor.

"The sodium tanks (sodium is the coolant in the reactor) have been fully covered to prevent any risk of water contact. Firefighting equipment is also in place," he said.

Posted by Rajan Alexander at 11:53 PM