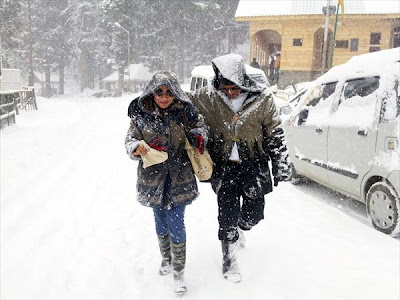 (Indian Express) 'Chillai Kalan' today made an anti-climatic entry as bright, sunny and clear skies marked the first day of the harshest 40-day period of winter in Kashmir instead of the expected snowfall.

Gulmarg skiing resort in north Kashmir and Pahalgam in south Kashmir and some other areas in the periphery of the Valley have witnessed snowfall last week but the weather has remained dry since then.

The clear skies have, however, resulted in drastic drop in night temperatures across the Valley with Gulmarg recording a low of minus 10.8 degrees Celsius last night.

Pahalgam resort also saw the mercury dipping to a low of minus 8.2 degrees Celsius while in rest of the Valley the minimum temperature stayed around three degrees below freezing point, an official of the MET department said.

Leh town was the coldest place in the state recording a minimum of minus 17.2 degrees Celsius followed by Kargil town at minus 13.8 degrees C, a drop of over 5.0 degrees compared to this day last year at both places.

The cold wave in the Valley began earlier this year than the normal period of 'ChillaiKalan' due to snowfall in higher reaches during the last week of November and early December.

Due to the cold weather, traditional gowns (pherans), made of woollen or tweed fabric, have become a common sight on the roads. Kangri, the earthen fire pot in a wicker basket, has also made a comeback into the lives of Kashmiri people.

However, the recent cap on number of subsidised LPG cylinders has rendered gas heaters almost obsolete. Even electric heaters are rarely used due to frequent load shedding.

Chillai Kalan is the period when the chances of snowfall are maximum and the most frequent as well. The winter games at the world famous skiing resort of Gulmarg are scheduled to coincide with it.

A good snowfall will ensure that the games like skiing, ice skating and snow boarding would go on for a longer period at the hill resorts like Gulmarg, Pahalgam and Patnitop in Jammu region.

Traditionally, Kashmiris used to dry vegetables like tomatoes, turnips, brinjals and gourd during summers to be used during winters when the Valley would remain cut off from rest of the country. The tradition continues in remote and far flung areas of the Valley.

However, with the Jammu-Srinagar National Highway becoming almost an all-weather road, fresh vegetables are available in the market throughout the year and the tradition of drying vegetables is no more seen in cities and towns of the Valley.

Dried fish, popularly known as Hokh Gard in Kashmiri, is, however, still used as a delicacy during the winter. Chillai Kalan is considered a treasure of Kashmiri literature and folk music. The bare trees, snowfall and winter chill of this period have provided content for many folk songs and poems.

Towards the end of January, the Chillai Kalan comes to an end but that does not mark the end of chill in Kashmir. It is followed by a 20-day long Chillai Khurd (small cold) and a 10-day long Chilai Bachh (baby cold).

Posted by Rajan Alexander at 10:24 PM