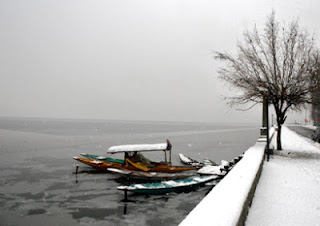 
Amritsar was the coldest place in the two states with the minimum temperature at 4.6degrees C which was one degreesree above normal. Hisar in Haryana recorded a low of 5.8 degrees C.


The minimum temperatures at most places, including Chandigarh, Ambala, Bhiwani, Karnal, Narnaul, Ludhiana and Patiala were either at normal level or above normal, a MeT office spokesman said. In Kashmir, 'Chillai Kalan' — the 40 day period of harsh winter — made an anti-climatic entry as bright, sunny and clear skies marked the first day on Friday.


Gulmarg skiing resort in north Kashmir and Pahalgam in south Kashmir and some other areas in the periphery of the Valley have witnessed snowfall last week but the weather has remained dry since then. The clear skies have, however, resulted in drastic drop in night temperatures across the Valley with Gulmarg recording a low of minus 10.8 degrees Celsius on Thursday night.


Pahalgam resort also saw the mercury dipping to a low of minus 8.2 degrees Celsius while in rest of the Valley the minimum temperature stayed around three degrees below freezing point, an official of the MET department said.


Leh town was the coldest place in the state recording a minimum of minus 17.2 degrees Celsius followed by Kargil town at minus 13.8 degrees C, a drop of over 5.0 degrees compared to this day last year at both places. The cold wave in the Valley began earlier this year than the normal period of 'Chillai Kalan' due to snowfall in higher reaches during the last week of November and early December.


Meanwhile, several areas of Himachal Pradesh groaned under sub-zero temperature as cold wave further tightened its grip in the region inspite of a dry day. While Keylong in tribal Lahaul and Spiti was coldest in the region with minimum temperature at minus 10.1 degrees; Kalpa, Manali and Bhuntar recorded a low of minus 2 degrees, minus 0.8 degrees and minus 0.2 degrees C respectively.


Solan and Sundernagar recorded minimum temperature at 0.5 degrees, three degrees below normal, while it ranged between 4 and 5 degrees at Palampur, Mandi, Nahan and Una and Shimla and Dharamsala, which recorded a low of 6.8 degrees C.


The local MeT office has predicted dry weather during next three days but a fresh feeble Western Disturbance (WD) is likely to affect the western Himalayan region from December 24 onwards.

Posted by Rajan Alexander at 10:34 AM