The Mayan End of the World Prediction and Climate Catastrophe 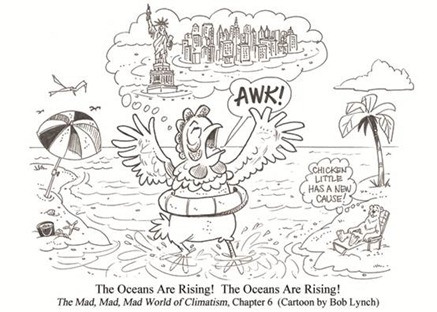 (Steve Goreham in Washington Times) The Mayan calendar is about to end, and with it, the world.

The latest apocalypse to capture our imagination is the idea that, along with the Mayan calendar, the world will end on the 21st day of this month. The Mayan “Long Count” calendar, which began in 3114 BC, ends on December 21, 2012. The calendar is supposedly the measure of days from the beginning of humanity to the end. As a result, some doomsayers predict the end of the world in a few days.

Proposed scientific reasons why we won’t have a merry Christmas include ejection of mass from the sun, a sudden switching of Earth’s magnetic poles, a massive meteor collision with Earth, and a sudden shift in Earth’s crust. At this very moment, people across the world are stockpiling guns, machetes, kerosene, matches, sugar, and candles in preparation for the coming disaster. But our National Aeronautic and Space Administration (NASA) assures us that the world won’t end on December 21.

Over that last two centuries, most doomsday threats have been blamed on humanity itself.

Consider overpopulation. The Anglican minister Thomas Malthus postulated in 1798 that global population would outstrip mankind’s ability to feed itself, leading to economic disaster. Dr. Paul Ehrlich followed up with his 1968 book The Population Bomb, predicting that hundreds of millions of people would starve to death during the decade of the 1970s. But the agricultural revolution of the twentieth century and slowing population growth have confounded the predictions of Malthus and Ehrlich.

Other feared man-made catastrophes include killer air pollution, global thermonuclear war, worldwide disease pandemics, economic collapse from passing the production point of peak oil, and disaster from genetically engineered foods. While the jury is still out in some cases, these predicted catastrophes do not appear to be occurring.

But the greatest of all these fears is Climatism, the belief that man-made greenhouse gases are destroying Earth’s climate.

Alarming climate change predictions would fit well with Mayan fears, but they need a little more time. According to economist Lord Nicholas Stern of the London School of Economics on the impacts of global warming:

“…what we are talking about then is extended world war…People would move on a massive scale. Hundreds of millions, probably billions of people would have to move…”

“The world hasn’t ended, but the world as we know it has—even if we don’t quite know it yet.”

“…before this century is over billions of us will die and the few breeding pairs of people that survive will be in the Arctic where the climate remains tolerable.”

What’s amazing is that the theory of dangerous global warming is accepted by the majority of world leaders. Today, the heads of state of 191 of the 192 nations are pursuing policies to try to stop the planet from warming. Most leading universities, NASA and other major scientific organizations, most of the Fortune 500 companies, and the news media accept the pending doom of man-made climate change. The world is spending over $250 billion each year to try to “decarbonize.”

But empirical evidence does not support the theory of catastrophic man-made warming. The 0.7oC rise in global temperatures since 1880 was matched one thousand years ago during the Medieval Warm Period, when temperatures were warmer than today. Despite increasing atmospheric carbon dioxide, Earth’s surface temperatures have been flat to declining for more than 10 years. Arctic ice has been declining, but Antarctic ice, which is 90 percent of Earth’s ice, has been increasing over the last 30 years. Sea levels are naturally rising at 7‒8 inches per century, but no evidence shows that accelerating sea level rise is underway. Hurricanes and tropical storms are neither more frequent nor stronger today than in times past. Polar bear populations have more than doubled in the last 50 years.

So, complete your Christmas shopping and don’t sell your winter coat. The world may end, but not before you have to pay your taxes and your credit card bills.

Steve Goreham is Executive Director of the Climate Science Coalition of America and author of the new book The Mad, Mad, Mad World of Climatism: Mankind and Climate Change

Posted by Rajan Alexander at 11:16 AM