The UN threat to internet freedom 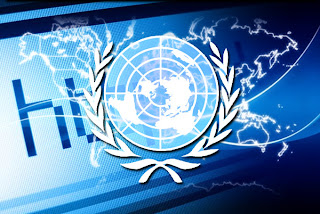 (Jonova)Oh Joy and Goody. Imagine if decisions about the global internet were made by the same institution that thought the rights of the downtrodden would be best protected by Col. Muammar Gaddafi? Hands up who wants another group of people you have no control over, making decisions for you and behind closed doors?

Of course, they will tell us the new regulations are there to help us, to stop spam, keep the internet fair and open. Then sooner or later, as with all human institutions, politics and ambition will mean the power is misused.

The people who will suffer the most are those in third world dictatorships. But free speech is the thing that stops the first world from turning into the third world. It’s hard to see how we get more than one shot at this. Once the net stops being open, imagine the fun trying to get that freedom back. Think of how fast protest groups can be arranged online through Facebook and email. Then think about how hard that gets if you have no e-help? The protests favored by the establishment get the free pass. What does everyone else do? Make thousands of cold phone calls? Use direct mail?

That’s why we have to protest while we still can, at the merest hint that anyone would dare change the way the Internet works. Ten minutes of effort now could help save our children from being forced to spend years fighting the system, just to get back what we have right now.

Thank God for the internet; skeptics would not have won many “climate” battles without it.

The era of pamphleteering in the late 1700s was the same. The governments used repressive legislation and printing press breaking gangs to prevent the populace from using the written word as a means of dissemination and organisation. Do not be complacent, the failure of the AGW Paradigm is a blow to the centralising tendency, and the UN is planning a backlash against the medium which exposed its hidden agenda.

I wrote about the pamphleteers here as I toiled to get back online after a lack of funds had left this site prey to hacks and attacks. (Thanks to donors who help us cover the increased security costs). Bloggers today are the pamphleteers of 250 years ago. Except we are luckier. Back then, people were jailed. Others died protesting for them in the street.

The ITU wants to control the internet, and this week they get another chance.

“If some proposals at WCIT are approved, decisions about the internet would be made by a top-down, old-school government-centric agency behind closed doors. Some proposals allow for access to be cut off more easily, threaten privacy, legitimize monitoring and blocking online traffic. Others seek to impose new fees for accessing content, not to mention slowing down connection speeds. If the delicate balance of the internet is upset, it could have grave consequences for businesses and human rights.”

The diplomatic process began in Feb 2012, and Robert McDowell wrote about The U.N. Threat to Internet Freedom in the Wall Street Journal.

The countries that most want ITU controlled include Russia, China, and Iran, and we all know why.

“Russia backed by China and India is pushing through a takeover of the internet by a UN supranational agency to make the web truly universal. The aim of the plan is to standardize the behavior of countries concerning information and cyberspace.”

The ITU is not all bad, but we need the net to stay open source.

Posted by Rajan Alexander at 1:01 PM