Behind the glitz and glamour of traditional water harvesting

Here’s an article by my pal Amitangshu Acharya, which first appeared in the Deccan Herald.  Amitangshu warns that there is much to learn about water harvesting technologies of the past, it is dangerous to romanticise the past! 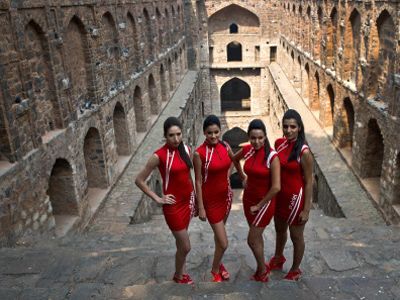 When a group of models in red had to pose for cameras to promote the launch of the recently concluded Indian Formula One Grand Prix in New Delhi, organisers selected Agrasen ki Baoli, a picturesque structure that is actually eight centuries old step well, as a backdrop.

Women in red, and even blue, green and yellow have not been uncommon around water sources in villages. In fact, in Rajasthan and Gujarat, wells without brightly dressed women around them are a rare sight. For sore eyes, the sensuous F1 may not be eyesores, though many may have already raised eyebrows at this convergence of F1 with a heritage site.

If nothing, such injection of glamour helps draw interest from urban India to traditional water systems.

And none can dispute that much of it was achieved when episode 12 of ‘Satyameva Jayate’ discussed traditional water harvesting systems in detail. It helped to bring home the science and wisdom behind these systems to a generation who perhaps never knew of their existence.

This new found “cool” quotient of traditional water harvesting is a result of sweat and toil of grassroots movements, activists, scholars, journalists and practitioners whose torn chappals and worn out khadi kurtas are a stark contrast to the branded red designer wear being sported by our F1 ladies in red. 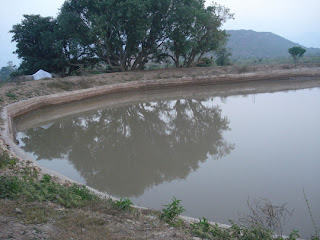 In short, in a pre-colonial past, people (essentially rural) lived in harmony with each other and nature. Traditional water harvesting was an epitome of collective management of natural resources combined with traditional knowledge.

Hence, the centralised ‘state’ is pitted against the decentralised and harmonious community. Broken pipelines symbolise bureaucratic in failure while rural step well surrounded by women in colourful saris becomes epitome of that wholesome goodness that is rural India.

Resultantly, the recipe for revival includes admonishing modernity and exhorting a return to egalitarian and ecological ‘village republics.’

Such romantic idylls catch imaginations quickly, just like a photograph of F1 girls against a baoli. But is the beauty behind such theories skin deep? A number of researchers, and many of them women, would agree. Some have been scooping out pollens and sediments from the beds of medieval tanks in South India for a decade.

Others have analysed folk songs and myths. Though carbon dating and folklores rarely meet, in this case they do, and conclude that sustainability of these systems are a myth. Not only does it show that such traditional water harvesting systems were prone to frequent failures, their cumulative impact, given their scale of construction across vast landscapes, were no less than large dams!

Such damning evidence is followed close on its heels by that of historical exploitation of labour from dalit vodda’s or tank diggers, who were forced to work on these sites for low or no wages. Such academic research looms like an ominous cloud over traditional water harvesting systems.

Like deatheater’s in Harry Potter novels, they seem to suck the life and colour out of the narratives that celebrate their centrality in holding communities together. In many cases, they do exactly the opposite. 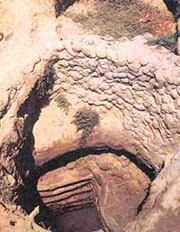 In fact, community owned traditional water systems are sites where difference between men and women and people of different castes are played out and reinforced. For example, if a dalit accidentally touched the mouth of the village spring in Uttarakhand, not only was he/she publicly admonished, elaborate puja had to follow to cleanse the water from such polluting touch. Dalits could not collect spring water along with other upper castes. They had to wait for them to finish.

And though women and water are considered as inseparable as a clinging wet sari in the rains, such glossy assumptions hides more than it reveals. Norms of purity and pollution are at their strictest best when it comes to water.

Be it a pond in West Bengal, or a step well in Rajasthan, sanctions on access applies to menstruating and pregnant women. In fact, traditional water harvesting systems help to brand women as periodically impure.

As more glitz and glamour gets infused into traditional water harvesting, it’s important to be untraditional and discuss the shades of grey that hides behind the red. Such discussions will reveal the preference for ugly and unaesthetic pipelines over the aesthetic and ephemeral step wells. It’s not just convenience, but the dignity that comes with it.

Posted by Rajan Alexander at 11:01 AM