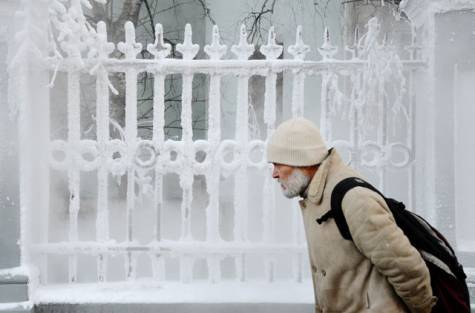 (Times of India) A vicious cold snap across Russia and Eastern Europe has claimed nearly 200 lives, officials figures showed today, as forecasters warned it would last until Christmas Eve.

In Russia, the cold has killed two people in the past 24 hours, the Ria-Novosti agency reported, citing medical sources, bringing the total number of deaths over the past week to 56.

The freeze had also left 371 people in hospital. Thermometers have been stuck below minus 20 degrees Celsius (minus 4 Fahrenheit) in Moscow — and below minus 50 degrees (minus 58 F) in some parts of Siberia — for a week.

Russian weather forecasters said temperature in the Khabarovsk region in eastern Russia had dropped to minus 43 Celsius, while Krasnoyarsk in Siberia reported minus 47.

This "abnormal" frost would last till Monday because of a persistent anticyclone, they added.

In Russia's European region, meanwhile, the mercury is expected to fall to minus 31 degrees Celsius on Christmas Eve before rising rapidly afterwards.

Other European countries hit hard by the extreme temperatures were counting the toll as temperatures gradually started to return to normal.

Authorities in Ukraine, which has been battling heavy snowfall for weeks, said 83 people had died of cold, with 57 of the victims found on the street.

The homeless are traditionally the hardest-hit by the region's bitter winters.

Another 526 cold victims were reportedly receiving hospital treatment in Ukraine.

Overnight temperatures in Ukraine reached an average minus 15 degrees Celsius, which is common at this time of year.

Ukrainian authorities said 93 villages -- mainly on the Crimean peninsula in the south of the country -- were still hit by a power outage.

In Eastern Europe, police in Poland said today that 49 people had died of exposure this month, with most of the victims homeless, as temperatures plunged to minus 10 degrees Celsius.

At least six people have died of exposure in Lithuania in the past weeks, police and emergency services said there.

In Latvia, temperatures reached minus 14 Celsius today morning. In the capital Riga, authorities decided to drop public transport fares to encourage drivers to leave their cars at home and prevent crashes and jams.

On Christmas Eve temperatures in Latvia are expected to drop to minus 28 Celsius, a record low.

Posted by Rajan Alexander at 11:50 PM