The effects of a cannonical El Nino is mainly felt in North-Western and Central regions of India. If IMD is warning Tamilnadu then they maybe expecting a El Nino Modoki.. 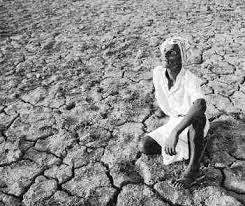 (NewIndianExpress) The Indian Meteorological Department (IMD) has issued an alert to the State agriculture department asking it to be prepare a contingency plan to face any eventuality triggered by the El Nino effect (Spanish for boy) this year. Tamil Nadu faces a threat from El Nino, a weather pattern that may force a drought on the State in 2014.

Confirming the reports, D S Pai, director, Long Range Forecasting, IMD, Pune, told Express that observations made in the Pacific Ocean near South America had revealed an unusual increase in the temperature close to the equator this year.

The change in the global climate pattern coupled with other reasons have resulted in the increase in the temperature of the sea, which would affect the rainfall pattern in South America and South Asian countries, including India, during the south west monsoon.

Initially, the fishermen of South America had found an unusual increase in sea surface water temperature affecting their catch.

“The increase in the temperature has affected growth of plankton, a nutritious food for fish, which has had a direct impact on reducing the fish population,”

said Pai. Further studies proved that due to water current, the temperature in the sea witnessed a spurt, creating pressure difference in the atmosphere, which increases or decreases the strength of monsoon across the globe.

“This may cause heavy rainfall in South America while South Asia, including India, may suffer from rainfall shortage in the corresponding period.

“Though the north western central India suffers badly due to the El Nino, we can’t rule out the possibility of its impact in southern parts of the country,” said Pai.

The senior agricultural officials in Tamil Nadu have already been apprised of the situation and have been asked to prepare for any eventuality. A senior officer in Madurai said,

“We are already witnessing the effects of El Nino. Normal rainfall in May is only 63 mm, but this year we have received 139 mm rainfall,” he said.

The farmers in TN already have suffered two years on a trot due to the drought, he said, adding,

“We would monitor the situation closely and advise the farmers on crop cultivation pattern in accordance with the rainfall.”