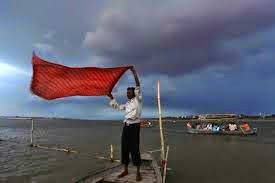 (PTI) Farmers and water managers in Tamil Nadu may have some cause for cheer as the agro-climatic research centre of a university has predicted normal rainfall in nine districts and near normal rainfall in 20 others during the coming southwest monsoon from June to September.

Normal rainfall (plus 10 per cent of Long Term Mean Seasonal Rainfall--LTMSR) was expected in Chennai, Dharmapuri, Dindigul, Krishnagiri, Madurai, Salem, Thiruvallur, Vellore and Thiruvannamalai districts in the monsoon as per analysis of city based Tamil Nadu Agricultural University (TNAU).

Only three districts - Nagapattinam, Ramanathapuram and

Theni - are likely to get below normal rainfall (minus 20 per cent (LTMSR), it said.

The forecast was developed at TNAU's Agro Climate Research Centre, based on the Southern Oscillation Index and Sea Surface Temperature Values using Australia Rainman International V.4.2, it said in a release.

The historical rainfall data collected from TNAU research stations were used to represent district rainfall information and the analysis indicated the expected rainfall amount for different districts with a 60 per cent probability level.

Though Tamil Nadu is under a rain-shadow area to this monsoon, more than 32 per cent of the total annual rainfall is received from this monsoon in Dharmapuri, Salem, Krishnagiri, Nilgiris and Kanyakumari district and this forecast is highly valid for these districts, the analysis said.

Posted by Rajan Alexander at 1:20 AM