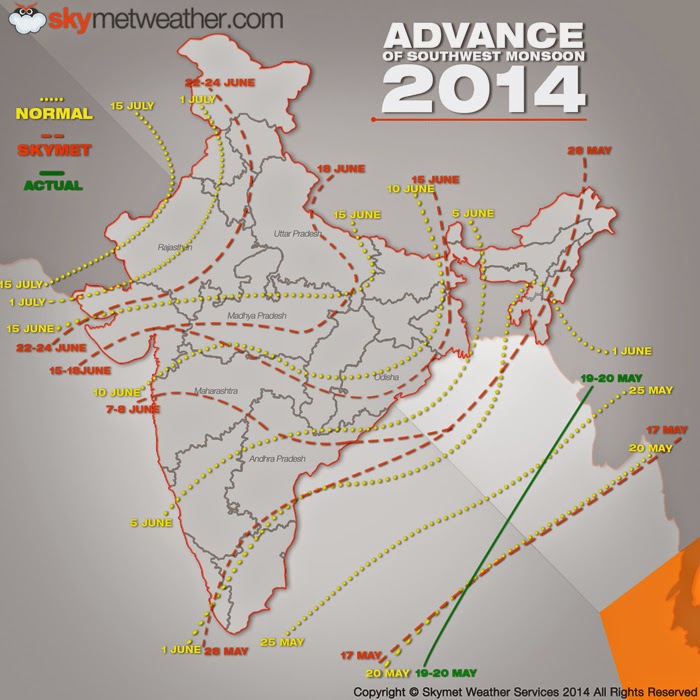 (SkyMet) According to the latest weather update by Skymet Meteorology Division in India, the advancement of Monsoon has slowed down a little after arriving before schedule in the Andaman Sea on 18th of May. It has been five days since the onset of Monsoon over the Andaman Sea but its progress has been a little sluggish in the last couple of days. Going by its progress, Sri Lanka which usually receives Monsoon by 25th May could miss the date as the Monsoon line is far from it at the moment.

Weathermen at Skymet are of the view that prior to the onset, weather systems such as the current depression in the Bay of Bengal will help the cross equatorial flow to strengthen, after which the strong southwesterly winds will sweep across Kerala coast, announcing the arrival of Monsoon.

The map in the article shows that after its on time arrival, the eastern arm of the Monsoon has made more progress than the western arm and has reached Myanmar early this year. The green line shows the actual Monsoon line which indicates that the eastern arm of Monsoon line has already entered Myanmar and is close to northeastern states, while the western arm has covered some parts of southwest Bay of Bengal. The red-dotted Monsoon line in the map has been drawn by Skymet Meteorology Division in India.

Posted by Rajan Alexander at 11:24 AM