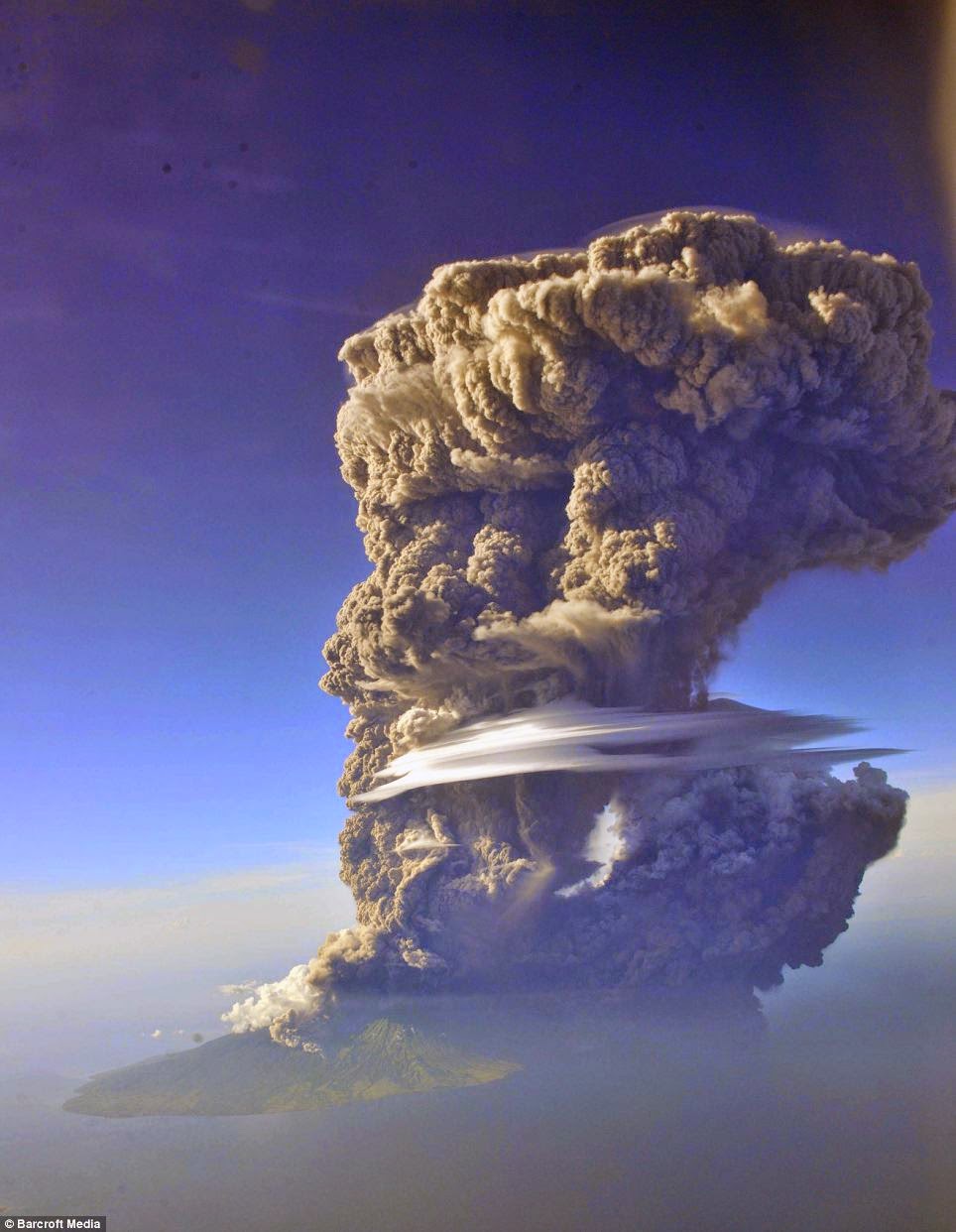 Three separate plumes are billowing from Sangeang Api, which is now erupting continuously after an initial blast yesterday afternoon. The cloud is now sweeping southeast over the west side of the Northern Territory as far south as Alice Springs, according to Tim Birch, a meteorologist with the Bureau of Meteorology’s Volcanic Ash Advisory Centre in Darwin.

“The plume that is affecting Darwin will be around for the next 18 hours,” he said. “We will see the plume here start to move east will start to move out of the Northern Territory and move steadily east in the location of Mount Isa (in Queensland) and it will start to dissipate.”

He said a second plume was hovering north of Darwin between 9.5km and 16km in the air, and could cause problems for flights between Australia and Malaysia and Singapore.

A third, lower-level plume is drifting west from the volcano, which lies off the Indonesian island of Sumbawa, and is within 100km of Bali.

“The volcano is still erupting as it has done for most of the day, not as violently as initially, but there is a steady plume,” said Mr Birch.

Virgin Australia spokeswoman Jacqui Abbott confirmed two Saturday afternoon flights to Denpasar — one from Adelaide and on from Melbourne — have now been cancelled.

Qantas Group spokeswoman Kira Reed said Jetstar had cancelled an Adelaide-Denpasar flight that travelled via Darwin, and all its services to and from Darwin remain grounded. Deputy Prime Minister Warren Truss earlier warned that flights around Australia could be affected for days.

“Depending on wind and other weather conditions, the ash has the potential to affect flights to and from other airports, including Brisbane, during coming days,” said Mr Truss. “This is currently being fully assessed”.

“Flight from darwin to Singapore delayed due to volcanic eruption in Bali. Hope everyone is ok and hope we get home to the uk safe.”

The Volcanic Ash Advisory Centre’s projections of the ash plume’s path from Sangeang. Source: Supplied
Social media was flooded with pictures taken of the eruption in Indonesia, with dive group Dunia Baru capturing a dramatic photo of the mushrooming cloud while out on their boat around 16 kilometres away.

Muhammad Hendrasto, head of Indonesia’s National Volcanology Agency, told Xinhua news agency that scores of farmers cultivating the land on the island, seven kilometres from the crater, were told to leave the area after the eruption yesterday. They were warned not to re-enter the island during the eruption period, he added.

Sangeang is one of 129 active volcanoes in Indonesia, which is prone to seismic upheaval due to its location on the Pacific “Ring of Fire”. 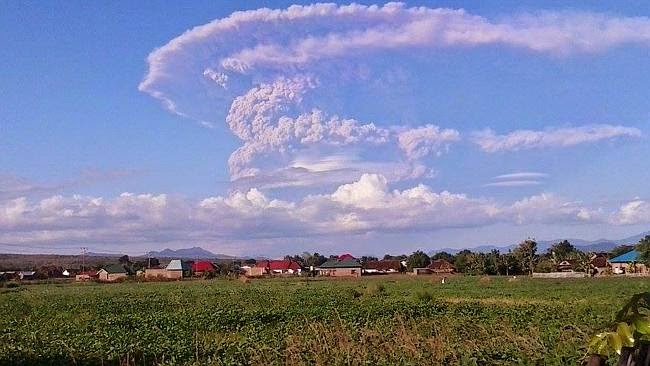 Tim Birch, a spokesman for the Volcanic Ash Advisory Centre at the Bureau of Meteorology in Darwin, said the cloud over the city was likely to stay put for some time, adding that the eruptions may well continue.Emile Jansons, manager of the centre, said the situation could still change at any time, with the cloud moving south fast. He added:

“It is continuing to disperse but it is moving very rapidly — at 70 to 80 knots (130 to 150km/h) — towards Alice Springs. There is a very strong jet stream so the boundary (of the cloud) may come further south.”

“It is spreading east and it may dissipate, so it is not clear how far east it will get,” he said.

Mr Jansons said volcanic ash can be hazardous to aircraft but the decision whether or not to fly is a safety and economic decision that rests with individual airlines. Virgin Australia said in a statement:

“Our team of meteorologists are continuing to monitor the situation, in consultation with the Volcanic Ash Advisory Centre in Darwin, and we will recommence normal operations as soon as the volcanic ash cloud safely allows it.”

The airlines affected made efforts to contact passengers to tell them of the cancellations, and advised traveller to check flight statuses on their websites or call their customer services centres for more information.

The Civil Aviation Safety Authority says volcanic ash can affect all aircraft with piston or jet engines at all flight levels. Fine particles of pulverised rock consisting mainly of silica contained in volcanic ash clouds can be highly abrasive and damage aircraft engines, structures and windows.

“Commercial air operators and private pilots planning to fly in this area should conduct a safety risk assessment before any flights,” a spokesman said.

“CASA recommends flights are not conducted into areas with visible volcanic ash clouds.

“Flights into areas with low levels of ash contamination should only be conducted after a safety risk assessment has been carried out.”