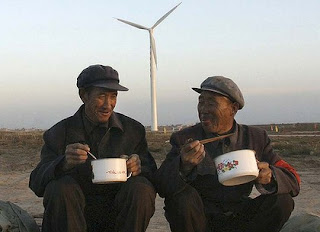 BEIJING: It's not only Western leaders like Julia Gillard and Barack Obama who face fierce resistance from climate sceptics as they try to lay out policies to tackle global warming.In China, where carbon emissions have surged despite tough government constraints and targets, President Hu Jintao is having to stare down claims that human-induced climate change is an elaborate American conspiracy.''Global warming is a bogus proposition,'' says Zhang Musheng, one of China's most influential intellectuals and a close adviser to a powerful and hawkish general in the People's Liberation Army, Liu Yuan.Mr Zhang told the Herald that global warming was an American ruse to sell green energy technology and thereby claw its way out of its deep structural economic problems.A year ago Mr Hu committed to lower the ''carbon intensity'' of economic output by 40-45 per cent by 2020 from 2005 levels. China appears on track to meet the target but that may still not be enough to save the world from destructive climate change, thanks to faster-than-expected Chinese economic growth.A new study by the Netherlands Environment Assessment Agency shows China now emits far more greenhouse emissions than any other country, with emissions doubling between 2003 and 2010.China's carbon emissions rose 10 per cent last year alone, to 9 billion tonnes, compared with 5.2 billion tonnes for the United States.The report showed India's emissions also rose rapidly, by 9 per cent, although its total emissions are still only one-fifth of China's.The most startling finding, however, is that China's per capita emissions are now higher than several rich nations including France and Italy. China's per capita emissions could even overtake the US within six years, the study said.But they may never catch up with Australia. Australia's total emissions plummeted by 8 per cent last year, according to the report, beginning to reverse a two-decade long rising trend. But Australia's per capita emissions are the highest of any substantial economy at 18 tonnes.In London on Thursday, the former Liberal leader Malcolm Turnbull praised China's incentives for renewable energy, which has seen its installed wind and solar capacity double in each of the past six years.These achievements have been lauded abroad but sullied at home by governance, efficiency and even environmental problems, leading to allegations that China has been duped.Mr Zhang, whose father was secretary to China's former premier Zhou Enlai, blasted Chinese policy makers for encouraging Chinese companies to buy foreign intellectual property in order to manufacture vast quantities of renewable energy equipment.The Chinese-made equipment helps the environment in other nations while leaving China with only financial and environmental costs, he said.''Lots of solar panels are made in China and the pollution is left in China but they are used overseas,'' Mr Zhang said. ''The low-carbon economy, carbon politics and carbon taxes are actually driven by the West as the foundation for a new cycle of the virtual economy.''Mr Zhang's comments provide a window into a contemporary internal Communist Party dynamic where no leader can afford to be accused of making ''soft'' compromises with American negotiators.It helps explain how Mr Hu's carbon commitment last year was overshadowed at the Copenhagen climate summit by China's abrasive diplomacy and its refusal to submit to international monitoring.Whether China can help avert a global climate disaster may hinge on whether its green policies can offset deep economic distortions and governance problems that tend to encourage resource-intensive investment.''If the current trends in emissions by China and the industrialised countries including the US would continue for another seven years, China will overtake the US by 2017 as highest per capita emitter among the 25 largest emitting countries,'' said the Netherlands report, which was sponsored by the European Commission and is based partly on BP energy consumption statistics.

Posted by Rajan Alexander at 11:57 AM