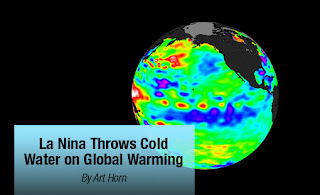 El Nino could become a permanent feature of the Equatorial Pacific Ocean. The warm waters of this never ending hot bath in the world’s largest water body would not only warm the entire earth dramatically, it would pump vast amounts of moisture into the air. This additional humidity would act as a positive feedback mechanism that would enhance the warming already being triggered by human burning of fossil fuels and in turn cause global warming to spin out of control. The melting of glaciers would accelerate and sea levels would rise much faster than predicted. The challenges of runaway warming would not be decades away but would be here now.

"It appears that we have a very good case for suggesting that the El Ninos are going to become more frequent, and they're going to become more intense and in a few years, or a decade or so, we'll go into a permanent El Nino." He went on to say "So instead of having cool water periods for a year or two, we'll have El Nino upon El Nino, and that will become the norm. And you'll have an El Nino, that instead of lasting 18 months, lasts 18 years,"

The El Nino of 1997 was blamed for droughts in Australia and New Guinea, A delayed Monsoon in Southeast Asia leading to forest fires that brought choking smoke to human populations, Drought in South Africa and devastating storms on the west coast of South American from Chile to Mexico. Everything that went wrong with the weather was blamed on El Nino. The scary prospect of a permanent El Nino was going to greatly speed up global warming and we had better do something to stop it, now!

At least that was what we were being told in 1997. As it turned out the 1997 El Nino was immediately followed by a La Nina. The cooling of the waters in the Tropical Pacific caused by La Nina dramatically dropped the earth’s temperature in the years following the 1997 El Nino which peaked in 1998. What those who were advocating the emergence of a permanent El Nino ignored was the phase shift of the Pacific Decadal Oscillation (PDO). The what? The 50 to 60 year cycle of warming and cooling that regulates the number of El Nino’s and La Nina’s. The Pacific Ocean had been in the warm phase of the cycle since the mid 1970s. During that time El Nino’s were twice as prevalent as La Nina’s and were much stronger and longer lasting. The result was warming global temperature from the mid 1970’s to the late 1990’s. It was during this warming spell that global warming hysteria blossomed. Many said the warming was due to increased carbon dioxide in the air but in reality the warming was caused by the warm phase of the PDO.

At this point one might ask how do you know the warming of the mid 1970s to the late 1990’s was caused by the warmer Pacific and not increasing amounts of carbon dioxide? Just look at what the global average temperature has done since the 1997/98 Super El Nino. There has been no warming of the earth average temperature since 1998. Atmospheric carbon dioxide has increased significantly in the last 14 years. In fact 25% of the increase of carbon dioxide since the birth of the industrial revolution has occurred since 1997. If carbon dioxide and its presumed strong water vapor feedback is such a powerful driver of the earth’s climate one would have expected the warming of the previous two and a half decades to have continued unabated after 1998 and into this year, but it has not. The prediction of the “permanent El Nino” has, as we say in the forecasting business, been a bust.

The shift to the cooler phase of the PDO has become more pronounced since 2007. The shift to cooler water in the Pacific is measured by the Southern Oscillation Index or the SOI. Since 2007 the SOI has been primarily in the positive mode indicating the existence of La Nina’s. This is in stark contrast to the predictions from the late 1990s and is indeed opposite of what was expected.

During the cool phase of the Pacific Ocean La Nina’s are twice as prevalent as El Nino’s and the El Nino’s that do occur are weak and short lived. The result is that the chilly waters of La Nina’s cause global cooling. Winters in the United States are becoming rapidly colder and more severe. The average temperature is falling at the rate of 3.0 degrees Fahrenheit per decade since 2000. Four of the snowiest months in New York City since 1869 have been since 2003. December of 2010 was the second coldest December in Central England since the temperature records began there in 1659. China had another bitter cold winter in 2011 and had the second coldest January in the last 50 years. Georgia and Florida had their coldest December in 2010 since the weather records began in 1895. The combined December and January period of 2010/11 in Florida was the coldest in 116 years of record keeping. Snowfall in the Sierra Nevada Mountains of California was the 4th highest since 1879 and the greatest in some areas since the winter of 1951. With another La Nina this winter the western United States will have another near record amount of snow.

So what’s ahead for global warming? Not much if La Nina has anything to say about it. We are now in the 13th year without measured global warming. The La Nina of 2010/11 faded in the spring of this year. Many expected the return of an El Nino as happened in the years prior to 1997 after a La Nina. The difference now is that the Pacific is cooler and will be cooler for another 20 to 25 years or so. Another La Nina has developed and is forecast to be as cold or colder than the one just departed. This is just what is to be expected in this new era of colder and more frequent La Nina’s.

The consequences of this return engagement will be many and varied. One will be the continued cessation of global warming. La Nina’s typically last about a year but the effects on the atmosphere continue for another 6 to 8 months after the La Nina has departed. There will be no global warming for the remainder of 2011 and none through all of 2012. By then we will be into year 14 with no global warming and even the most ardent of “warmers” will have to start scratching their heads in wonder as carbon dioxide levels continue to rise but the temperature does not.

Historically we know that La Nina is associated with extremes of weather around the world. Some of this extreme weather can be beneficial and some can be destructive. Another winter of heavy snows in the mountains of the Western United States will ensure plentiful water supplies for years to come in a region that has been told to expect drought from global warming. Most La Nina’s are warm and dry in the Southeastern United States and this could be helpful to Florida tourism this Winter. On the other hand the drought in the South Central States will continue through 2012 and may go beyond. Hurricanes proliferate in La Nina

conditions so the hurricane season of 2012 will likely be stormy although where the storms will strike, if at all is unknown. Heavy rains can occur in the Ohio Valley during La Nina and the threat of a re-occurrence of floods next spring is a concern.

Unfortunately La Nina helps to spawn strong and numerous tornadoes in the American spring and next March, April, May and June will likely see more outbreaks of deadly twisters. Australia can have floods in some parts of the country during La Nina but in many areas the water will be welcome.

Predictions of a permanent El Nino have failed as has the relationship between increasing levels of carbon dioxide in the air and global temperature. The powerful interest groups behind man made global warming will ignore what nature is doing and continue to preach rapid warming. They will pound their fists on the table of public opinion, insisting this will cause melting ice, rising seas levels, drowning polar bears and blame every severe storm, cold wave, heat wave, snowstorm, drought, flood, hurricane and tornado on climate change and our use of fossil fuels. In the real world the new era of colder water in the Pacific Ocean will generate colder and longer lasting La Nina’s and continue to throw cold water on global warming. I wonder when reality will begin to sink in for those invested in man made climate change? The answer for many will be never.

Posted by Rajan Alexander at 11:04 AM