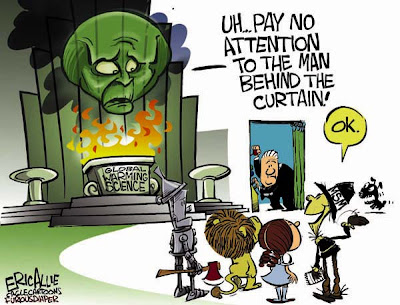 A simple but powerful definition of science is the ability to predict. If your predictions are wrong there is clearly something wrong with your science. The failure, or at best imprecision of weather forecasts, indicate it is not a science. Supporters of “official” climate science, produced by the Intergovernmental Panel on Climate Change (IPCC), tried to distance themselves from this problem by saying that they were two different things. The difficulty is climate is an average of the weather; therefore it can only be as precise as the weather.

I started this article before a discussion about climate model prediction began on the web. A follow up on the topic occurred at the web site of Roger Pielke Jr. It’s an arcane discussion that creates confusion between validation of the climate models and their predictive ability. Validation is the process of testing the predictive ability of a model by having it recreate a past known climate condition. It used to be called hindsight predictions. The idea is if they can hindsight predict then their future predictions have validity. Climate model predictions have consistently failed. Yet the IPCC and others claim they are validated. It is a sham. What they did was simply plug in variables apparently randomly until the model appeared to recreate the past condition.

A good example of this process was the failure to hindsight forecast the global cooling from 1940 to 1980. It was a big problem because during that post war period human production of CO2 increased the most. The reason for their errors always has to have a human origin. They argued that human production of sulfates blocked sunlight and caused the cooling. The problems is after 1980 sulfate levels continued to rise but temperatures also began to rise.

Official climate science is that produced by the Intergovernmental Panel on Climate Change (IPCC). Evidence of the grossly inadequate science appeared early. All of their predictions were wrong from the very first Report. They did not address the problem as true science would do by realizing there was something wrong with their understandings of weather and climate mechanisms. Instead, they did what all-official climate science has done since the IPCC was formed and simply moved the goalposts. This is usually done with a name change. The classic one was the shift from global warming to climate change. Instead of making predictions, they claimed they were creating scenarios.

Economist David Henderson dissected and dissed the IPCC economic models. Richard Lindzen, MIT Professor of Atmospheric Science and past UN IPCC member called them “children’s exercise”. Economic model predictions are as inaccurate as climate model predictions. When you combine the two you compound the error potential. 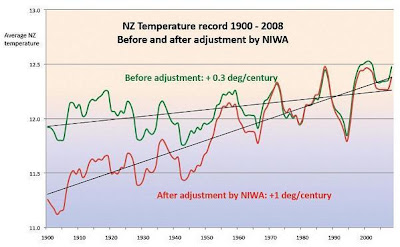 Another part of the manipulative process put in place by the IPCC was the practice of creating and releasing an SPM in which the serious limitations of the science are downplayed and the outcomes grossly distorted and exaggerated. Media sensationalism requires emphasis on the most extreme scenario, so they focus on the most extreme potential temperature increase. Every actual temperature since the start fell well short of their lowest temperature increase scenario. In fact, since 2001 the temperature trend has declined. This despite attempts to exaggerate the increase by adjusting the older temperature records down. New Zealand is a good example of what was done in national records (Figure 1). What underscores the apparent deliberate attempt to mislead is that the media and most of the public believed the scenarios were predictions. I am unaware of any attempt by the members of the IPCC or the organization itself to correct the misinterpretation.

All the changes made by the IPCC and proponents of the anthropogenic global warming theory (AGW) were not done to adjust to new evidence or correct previous errors. They were done to reinforce a hypothesis about which Richard Lindzen said years ago, the consensus was reached before the research had even begun. The hypothesis and the computer model simulation used to predict global climate has consistently failed. It’s not surprising because weather forecast models don’t work either, and climate is the average of the weather. It is not science and should never be the basis of policy.

Posted by Rajan Alexander at 11:21 PM