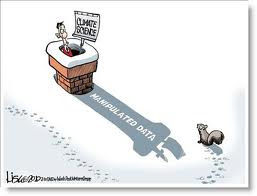 The Climatic Research Unit (CRU) email controversy (also known as "Climategate") began in November 2009 with the hacking of a server at the Climatic Research Unit (CRU) at the University of East Anglia (UEA). On 20 November, two weeks before the Copenhagen Summit on climate change, an unknown individual or group breached CRU's server and copied thousands of emails and computer files to various locations on the Internet.

The story first broke in the climate skeptic blogosphere, with my pal James Delingpole of the UK Telegraph popularizing the term "Climategate" to describe the controversy. The emails revealed scientists manipulated climate data, suppressed their critics and evidence that global warming was a scientific conspiracy. Once the credibility of climate data was suspect in public perception, the steam went out of the global warming movement.

The BEST project is funded by unrestricted educational grants totaling (as of March 2011) about $635,000. Large donors include Lawrence Berkeley National Laboratory, the Charles G. Koch Foundation, and the Fund for Innovative Climate and Energy Research (FICER), and the William K. Bowes, Jr. Foundation. The donors supposedly have no control over how BEST conducts the research or what they publish. Now the Charles G. Koch Foundation was the charity of the Koch Brothers who global warmists loved to hate for funding climate sceptical research.

Professor Richard Muller, a physicist, and his team at Berkeley Earth Surface Temperature (BEST) promised to “resolve current criticism of the former temperature analyses, and to prepare an open record that will allow rapid response to further criticism or suggestions”. Because the BEST team constituted of some sceptics as well, even many sceptics looked favourable at this attempt.

A week ago, Muller claimed to the Wall Street Journal that the case for global warming scepticism was over. Thanks to research from his Berkeley Earth Surface Temperatures (BEST) project, Professor Muller stated confidently, we now know that the planet has warmed by almost one degree centigrade since 1950. What's more, he told the BBC's Today programme, there is no sign that this global warming has slowed down.

The findings reverberated around the world which claimed that at least here was hard evidence of global warming which sceptic research independently arrived at. The Washington Post commented:

“We know that the rise in temperatures over the past five decades is abrupt and very large. We know it is consistent with models developed by other climate researchers that posit greenhouse gas emissions — the burning of fossil fuels by humans — as the cause. And now we know, thanks to Muller, that those other scientists have been both careful and honorable in their work.

Nobody’s fudging the numbers. Nobody’s manipulating data to win research grants, as Perry claims, or making an undue fuss over a “naturally occurring” warm-up, as Bachmann alleges. Contrary to what Cain says, the science is real.”

But the joy of climate alarmists proved short lived and their smug was wiped out from their faces very fast. A report published by the Global Warming Policy Foundation includes a graph of world average temperatures over the past ten years, drawn from the BEST project’s own data published in its website. 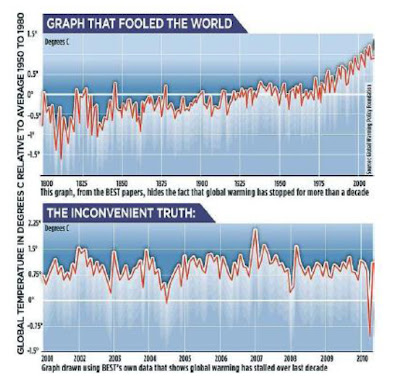 Notice the BEST graph is until only 2000 when we are in 2011 to demonstrate a warming world. Even sceptics do not challenge this claim but only differ in attributing this phenomenon to natural cycles. But GWPF’s graph 2000-2010 establish that according to BEST’s own data, there had been no accelerated warming trend. This graph shows that the trend of the last decade is absolutely flat, with no increase at all – though the levels of carbon dioxide in the atmosphere have carried on rising relentlessly, demolishing Muller’s claim to the contrary.

But the humiliation of Muller as a cheat did not stop there. A leading member of Prof Muller’s team has accused him of trying to mislead the public by hiding the fact that BEST’s research shows global warming has stopped. Prof Judith Curry, who chairs the Department of Earth and Atmospheric Sciences at America’s prestigious Georgia Institute of Technology, said that Prof Muller’s claim that he has proven global warming sceptics wrong was also a ‘huge mistake’, with no scientific basis. Prof Curry is a distinguished climate researcher with more than 30 years experience and the second named co-author of the BEST project’s four research papers. Her comments, in an exclusive interview with The Mail on Sunday, seem certain to ignite a furious academic row. She said this affair had to be compared to the notorious ‘Climategate’ scandal two years ago.

Like the scientists exposed then by leaked emails from East Anglia  University’s CRU, her colleagues from the BEST project seem to be trying to ‘hide the decline’ in rates of global warming. In fact, Prof Curry said, the project’s research data show there has been no increase in world temperatures since the end of the Nineties – a fact confirmed by a new analysis that The Mail on Sunday has obtained. ‘There is no scientific basis for saying that warming hasn’t stopped,’ she said. ‘To say that there is detracts from the credibility of the data, which is very unfortunate.’

When BEST was formed, its Richard A. Muller told The Guardian:

"...we are bringing the spirit of science back to a subject that has become too argumentative and too contentious. ...we are an independent, non-political, non-partisan group. We will gather the data, do the analysis, present the results and make all of it available. There will be no spin, whatever we find. We are doing this because it is the most important project in the world today. Nothing else comes close."

BEST proved it was an anti-thesis to its overt objectives.

Posted by Rajan Alexander at 11:44 AM