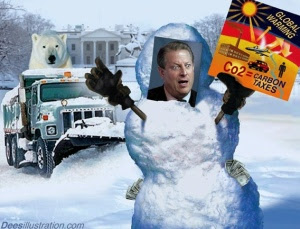 Soon it will be time for the annual climate change party. This time it is in Durban, South Africa. Before that it was Cancun, Copenhagen….., they always seem to be in nice places where a good time can be had by all.

How come they never seem to want to go Niger in summer, or Siberia in winter? They could really come to grips with the climate in these places. Is it not ironic that 15,000 people, burning hundreds of tons of jet fuel, gather to discuss how to reduce emissions of CO2? What about all the hot air that will be generated at the conference?

Seriously, there are big problems with the conventional theory of Global Warming, as propounded by Al Gore, the IPCC (intergovernmental panel on climate change) and their friends. Greenhouse Gases, trapping heat and causing the world to warm up. They have conducted a brilliant propaganda campaign that has almost the entire world believing what they say is true.

It is only because their program has high economic costs that they have failed to push through their agenda….Carbon taxes, carbon credits, cap and trade etc. They have used misleadingly presented data, computer models which are worthless and even outright lies to achieve their ends.

A couple of examples. A 2007 IPCC report stated that they had ‘high confidence’ that all the Himalayan glaciers would be melted by 2035. When this was disputed, they said at first that it was a mistake; finally they had to confess that it was done deliberately, in order to put pressure on political leaders. Just a few weeks ago the ‘Times Atlas’ brought out a new edition. This expensive Atlas claims to be authoritative. Their map of Greenland showed areas covered by ice, 500 meters thick, as ice free. This was then touted as ‘evidence’ that Greenland was melting.

The climate of the earth has always changed and will always change. Our human lifetimes are too short to appreciate these changes which occur over thousands or millions of years. The rise of the Himalayas and the vast Tibetan plateau, about 40 million years ago, are thought to have ushered in an era of repeated ice ages.

In the last million years there have been several ice ages. The average ice age lasts 80-100,000 years. The periods in between 10-20,000 years. The entire recorded history of the human race is in one of these in between periods called inter-glacials. In India, climate change is one possible explanation for the collapse of the Indus valley civilization. The Saraswati River disappeared in historic times.

The IPCC and their cohorts believe that emissions of Greenhouse Gases, basically CO2, are causing the earth to warm up. Let me point out a few inconvenient facts.

1. According to the IPCC, 1998 was the hottest year worldwide. Since then it has been flat or cooling slightly. In the 13 years since 1998, the CO2 levels in the atmosphere have gone up by about 7%. This is substantial. If what they say is true, why has it not got hotter?

3. Russian scientists at the Vostok station on Antartica, have studied ice cores which record CO2 levels and temperatures going back hundreds of thousands of years. They have found that CO2 levels rose 800 years AFTER temperatures rose. Therefore historically, rising CO2 levels have been an effect and not a cause of temperature rise.

4. The natural emissions of CO2 are many times human output.

5. Extinction coefficients. It can be demonstrated that at atmospheric concentrations, CO2 will absorb to extinction (completely) all the wavelengths it absorbs in the infra red, within tens to hundreds of meters. The atmosphere is dozens of kilometers thick, therefore, adding more CO2 will not make any difference.

The Global Warming propaganda machine puts out scare stories regularly. Let us deal with a couple of generic examples.

1. The Greenland icecap is going to melt. The sea levels are going to rise, flooding coastal areas. Sounds familiar? OK. These things are very difficult to measure, but according to the best estimates by respectable institutions (NASA, NOAA etc) Greenland has lost 0.1% of its ice in the last 13 years. If this rate is maintained for 130 years, Greenland will lose 1% of its ice. That will raise sea levels worldwide by about 2cm. Get out a ruler and see how small 2cm is. Less than the tip of your little finger. Are you still scared?

2. CO2 is going to acidify the oceans, dissolve the shellfish, and kill the corals. Fine. Assume that by some magic trick we could put ALL the CO2 in the atmosphere into the ocean. CO2 is about 380 parts per million in the atmosphere. In the ocean it will be less than 1 part per million. How small is one part per million? Take a liter of water. One part per million is one thousandth of one ml. You will need a magnifying glass just to see it. Do you think that this tiny quantity, of a very weak acid, will acidify the liter of water to any significant extent? The next time you read a scare story, be wary. I saw this story the other day. They were saying that the cocoa crop in West Africa was going to be wiped out by rising temperatures. Oh oh, no chocolate, this is serious business! Then I read the rest of the article. They were talking about a prediction made by a computer model about conditions 50 years from now. No worries! My chocolate was safe.

A few facts to put things in perspective. The earth is billions of years old. The surface and the atmosphere of the earth have been transformed by life. All life on earth is related and based on carbon and DNA. All the oxygen in the atmosphere, all the coal and oil, most of the iron ore, limestone and chalk deposits are there because of the activities of living things, together with geological processes. 80 to 90% of the mass of all living things on earth is accounted for by bacteria. We cant even see them without a microscope.

To explain long term changes over millions of years, we look to geology. Plate tectonics, the slow movements of the continents and so forth. Climatic changes over tens of thousands of years can be explained by the Milankovitch cycles. These are slow cyclic changes in the orbit and the inclination of the earth. The father of oceanography Otto Pettersson, used ancient Icelandic sagas, and variations in the orbit of the moon, to come up with a theory of an 1800 year climatic cycle. This theory is unverified but he did put his finger on ocean currents as the dominant factor in climatic changes on earth.

As I said earlier, CO2 is not the culprit. The IPCC and gang are looking in the wrong place.

If you look at the first graph you will see a distinct 30 year cycle in north Atlantic water temperatures. This same cycle, warming between 1919 and 1950, cooling until 1980 and warming after that, is also seen in the IPCC’s charts of ‘Global average temperature’. There is apparently also a 30 year cycle in the Indian monsoon. 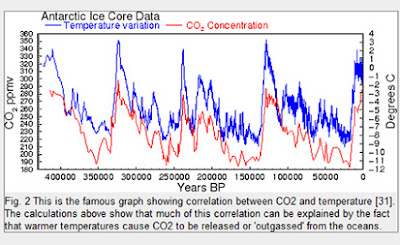 
As I said before even the IPCC figures show that the greatest warming is at high latitudes in the Atlantic-Arctic basin. Hence all the fuss about the reduction in the area covered by sea ice in the Arctic. This is due to variations in the Gulf stream and currents in the arctic ocean. When the Gulf stream turns east off Newfoundland, it is 100 kilometers wide and 1 kilometer deep. It transports several times more water than all the rivers of the world combined. I made a prediction almost a year ago that the warming trend was over. It is already coming true.    n

Absorption spectra of CO2 and other gases 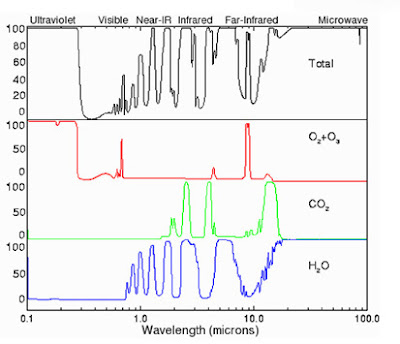 The ‘La Nina’ condition has set in off the west coast of South America. A huge area of the Pacific ocean is cooling. If the IPCC puts out honest figures it will show that what remains of the warming since 1980 has been wiped out and that a cooling trend has started.

I am going to Durban, I want to have some fun too!

Gopal Panicker, a graduate in chemical engineering from REC, Trichy who has researched the subject while in the USA during the last decade, questions the basis of the world-wide propaganda concerning global warming and the effects of carbon dioxide on the atmosphere. He is now a philosopher based in his home town Trivandrum, with much to be philosophical about.

He could well be the first in the world to actually predict an impending Global Cooling, a diagonally opposite view from the more popular Global Warming forecasts. Panicker’s previous articles on this site can be accessed on the links below.


He welcomes intelligent reactions and counter arguments to his theories. He can be contacted at testactics@yahoo.com or gopalpanicker@hotmail.com

Posted by Rajan Alexander at 8:38 PM